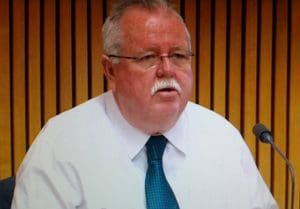 As chairman of the Senate’s Rural and Regional Affairs and Transport Committee, Senator O’Sullivan led a Senate Estimates hearing on Tuesday, where AWI chairman Wal Merriman admitted he had breached the body’s Code of Conduct and damaged the standing of the research, marketing and development company.

Mr Merriman also admitted he could hold up to half the potential votes in an AWI director election as proxies from wool grower shareholders. AWI is funded by compulsory wool grower levies and partly-matched Federal Government monies under a Statutory Funding Agreement with strict governance clauses.

The Senate Estimates hearing focused on AWI governance issues, board and election procedures, including the ‘man in the mirror’ incident involving AWI chairman Wal Merriman, the AWI leader’s election proxy and election powers and his recent confrontation with an ABC journalist.

Questions have been raised as to whether recent AWI board and director decisions have been consistent with the body’s board charter and the SFA, and appropriate under a grower-owned levy-funded body structure. An ANAO investigation into AWI could be expected all decisions around research and development expenditure, Wool Poll, board nomination processes and election proxies.

The ANAO is a specialist public sector agency that supports the Auditor-General of Australia and has extensive powers of access to documents and information. Its purpose is to improve public sector performance and support accountability and transparency in the Australian Government sector through independent reporting to the Parliament, the Executive and the public. The ANAO primarily conducts performance audits, financial statement audits, performance statement audits and assurance reviews. It also briefs parliamentarians and parliamentary committees, on request, about audits and audit related services.

The main functions and powers of the Auditor-General under the Auditor-General Act 1997 include auditing financial statements of Commonwealth agencies, authorities, companies and their subsidiaries in accordance with the Financial Management and Accountability Act 1997 and conducting performance audits which are tabled in Parliament.

A spokesman for Senator O’Sullivan said today that an ANAO overview of AWI’s recent decisions would look at how the body’s decision-making processes were formulated.

“Given that it is a compulsory levy-payer funded body, we need to ensure that the funding and decision making processes are being undertaken in a way that is in the best interests of the industry.”

“Any decision on a potential ANAO investigation needs to have the support of the RRAT committee,” he said.

“There is a serious need for the body (AWI) to look at its own corporate governance and decision-making processes and we are ensuring there is a clear process on how these outcomes are reached.”

The Senate committee is expected to make a decision on whether an ANAO investigation in coming weeks, but will also be consulting with other wool industry bodies.

“There is a need to look at how all the decision-making processes of the company (AWI) that have been made in recent years,” the spokesman said.