AWI chairman Wal Merriman to stay while shareholders support him 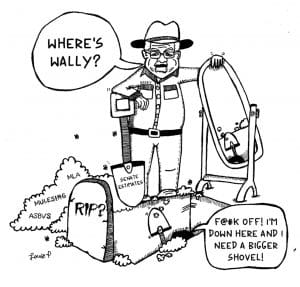 AUSTRALIAN Wool Innovation chairman Wal Merriman has indicated he won’t be resigning despite calls to stand down, after he swore at an ABC reporter for questioning him about the AWI leader’s covert observation of Merino breeders behind a one-way mirror.

Despite not being invited by the Axiom Research researchers nor AWI staff managing the project, Mr Merriman, who is a co-principal of the Merryville Merino Stud, was allowed to observe the breeders behind a one-way mirror without their permission, even though they had been promised anonymity and confidentiality. Sheep Central broke the original ‘The Merino man behind the mirror: AWI’s Wal Merriman’ on September 6.

When an ABC reporter last week sought to question Mr Merriman on the ‘man in the mirror’ incident, Mr Merriman called the ABC journalist a “useless prick” and told him to “f— off, report that”.

“It is not something that is conducive to our wool industry in the past, present or future.

“I just think he should stand down.”

Mr McBride said he had asked Mr Merriman to write personal letters of apology to the MERINOSELECT breeders. He said the ABC incident did not present the Australian wool industry well at a national nor international level.

“I really do feel that it is doing damage to the wool industry as a whole and I believe that Wal should stand down and make way for the likes of re-standing director Paul Cocking and new nominee Don Macdonald.”

“We need people of that calibre to run on the board and the independence of the current board must come into a degree of question.”

A statement from AWI corporate communications manager Marius Cuming said the language used by the AWI chairman towards the ABC last Thursday night was unfortunate.

“The ABC reporter was invited to a private function with over 130 growers present, designed to celebrate the success of the International Woolmark Prize but his approach was disingenuous.

“After being told in person by both the chairman and the CEO that neither wild be making a statement, the reporter ambushed them both towards the end of night, did not declare he was recording at the time and deliberately sought to intimidate to seek a reaction,” the statement said.

“The issue of media intimidation of AWI and misleading coverage of the wool industry at a time of great optimism was raised at the Industry Consultative Committee which met earlier in the day.”

Merriman to stay with shareholder support

Mr Merriman today told Sheep Central he would stay on the board while he had shareholders’ support.

“I will be staying there (on the board) while ever the shareholders want me.

“AWI shareholders and growers enjoy the freedom of a vote of choice for their elected representatives and my fate will be decided by the shareholders.”

However, under the current system of director rotation, as the AWI leader is not up for re-election in the 2017 AWI board election, AWI shareholders wanting to vote on Mr Merriman’s future might have to wait until he is next up for re-election, which might not be until 2021. AWI board member Colette Garnsey was elected to the AWI board in 2011 and is standing for re-election this year against fellow director James Morgan (2013) and Paul Cocking (2013), and new nominees Will Wilson and Don Macdonald.

Under AWI’s constitution, at every annual general meeting held in a rotation year, one-third of the directors (other than a managing director under Rule 14.2), or if the number of directors is not a multiple of three, then the number nearest to but not less than one-third, must retire from office.

AWI chairman is appointed by the board

WoolProducers Australia chief executive officer Jo Hall said the position of the AWI chair, is actually a board appointment, not a shareholder decision.

“As an industry owned company, AWI emphasises the fact that director elections enable growers to determine who sits on the AWI board and make decision on levy expenditure on their behalf.

“It is also often stated that if levy payers don’t like how their money is spent they can vote directors off,” she said.

“Whilst this is factually correct, the issue is with the provisions held in the AWI Constitution, whereby elections are held every two years and according to AWI’s constitution.

“This means that an AWI director can legitimately sit on the board for six years before they have to face an election,” Ms Hall said.

“WPA doesn’t deem this agile enough for wool growers to have sufficient say in the direction of their company.”