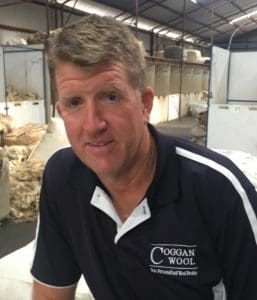 In a recent letter supporting WEP consultant Will Wilson’s campaign for a seat on the AWI board, Mr Merriman lauded Mr Wilson’s exemplary work in bringing the WEP from concept to reality “where brokers, buyers and growers unanimous agree that it proceed.”

Inland Woolbrokers Association president Mark Coggan said the body has at no time collectively agreed to proceed with the proposed Wool Exchange Portal as stated.

“Despite recent presentations to the Association by WEP representatives, members of the IWBA have been unable to make any clear decision due to lack of concrete information or meaningful explanation of the WEP.

“Our members cannot support the WEP until some clarity is forthcoming.”

Mr Coggan said the Inland Woolbrokers Association was formed in 1994 and currently represents 14 independently owned wool brokers operating in New South Wales and Victoria. The association’s membership accounts for about half the wool offered in Sydney and a substantial but smaller portion in Melbourne.

The Australian Council of Wool Exporters and Processors last week said Mr Merriman’s statement that brokers, buyers and growers unanimously agree that the WEP proceed is not correct from ACWEP’s perspective. The National Council of Wool Selling Brokers of Australia last week also refuted they agreed the WEP should proceed and said the body was “agnostic” about the project.

Mr Coggan said the Inland Woolbrokers Association would like to encourage all AWI levy payers to take the time to vote in the upcoming AWI board member election, as this will have an effect on the utilisation of levy funds.