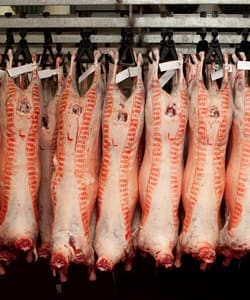 Meat & Livestock Australia’s market information manager Stephen Bignell said lamb slaughter for Q2 in FY2022 was recorded at 5.44 million, an increase of 9.5 percent on the previous quarter and 1.1pc higher than the June 2021 quarter.

“The fact that lamb slaughter for Q2 2022 (October to December 2021) was not within in the historical top 20 lamb slaughter volumes, but was the third highest level of production, shows the benefits of increasing carcase weights,” he said.

At 25.8kg/head, this was a 0.6pc increase year-on-year levels, demonstrating that genetic improvement and management is driving increased efficiencies and production for the national lamb flock,” Mr Bignell said.

MLA said unlike lambs and cattle, sheep slaughter fell in Q2 2022, reducing by 13.2pc or 209,600 head. However, according to Mr Bignell, a drop in slaughter in the June quarter is common as producers are retaining ewes for lambing during this period.

“Encouragingly, when compared to the corresponding June period in 2021, mutton slaughter is up 27pc or close to 300,000 head.

“This would suggest the flock rebuild is maturing and in line with MLA’s most recent June sheep projections,” he said.

MLA said production of mutton was recorded at 35,091 tonnes in Q2 2022, a 11.3pc reduction on the previous quarter, but 25pc higher than 2021 levels. As mutton production fell by less than the fall in slaughter, carcase weights climbed, MLA said.

NSW sheep are the heaviest

“Interestingly, the average carcase weights for sheep are below that of lambs on a national level.

“Sheep in New South Wales are the heaviest weighting 27.3kg, while sheep in Tasmania are the lightest weighing 19.5kg/head,” Mr Bignell said.