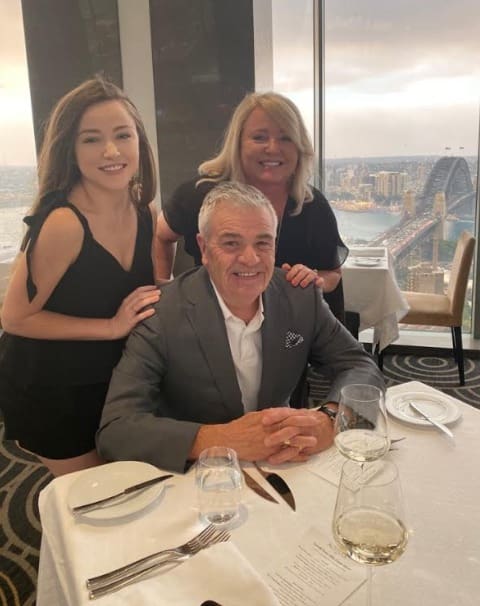 Jimmy Jackson celebrates 50 years in the wool industry with his daughter Anastasia, left, and his wife Alina.

The 66 year-old this week has celebrated 50 years working in the world wool industry, most of it on behalf of Australian growers.

He started working for the International Wool Secretariat’s (now The Woolmark Company) International Development Centre in Ilkley, West Yorkshire, England on August 10 1970 as a 16-year-old.

Ilkley is just north of his hometown Bradford, a major wool-processing centre then known as Wool City, because about half of all the world’s wool passed through its mills.

“When we was walking to school there was wool everywhere.”

His first job was as a laboratory technician in a chemical processing lab, working initially on the wool machine-washable process Superwash that is now established around the world.

Extensive education and training with Woolmark led to an honours degree in textile technology form the University of Huddersfield and becoming a fellow of the International Textile Institute.

Rising through the ranks, he came to Australia 15 years ago to become general manager of product development and innovation at Australian Wool Innovation before his position was cut in a restructure in 2016. He has worked in about 100 countries and played a key role in established processing in several countries including China and Vietnam.

In Australia about 40 years ago, he oversaw Superwash research to make wool machine-washable, and was involved in establishing early stage processing for Michells in Sydney, setting up a shrink-proofing plant in Patons’ hand-knit spinning factory in Launceston and helping Chargeurs establish a wool Merino combing factory in Wagga Wagga.

All of these processing operations have now closed, except the Michells plant which was moved to Adelaide. Mr Jackson now travels the world with his International Wool Consulting Group, working for major textile companies and brands on processing and product development. His Chinese clients consumer about 40 million kilograms of greasy wool annually. A 20 year-old Jimmy Jackson takes a break in 1974 after carrying out Superwash trials while wearing personal protective equipment.

Costs and knowhow will limit an Australian textile revival

However, despite modern wool processing now involving more automation with less staff and consolidation of processing stages, Mr Jackson believes there are two main reasons why Australia’s once booming wool textile industry is unlikely to be revived.

“I’d like to see it, but there are two big challenges.

“One is the actual cost, although labour is getting more expensive in China, Australian salaries still are still a lot higher.”

He said land, buildings and utilities are also very cheap in China, where most of the world’s wool is still processed.

“The other problem is knowhow, essentially all the wool processing knowhow today resides in China, they bought it in.

“They’ve been employing more for the last 14 years and when I go up to China, I’m tripping over old Italians, old British people, people the same age as me, experts.”

Many of the managers and general managers of major Chinese processors are his students from 20 years ago. Australia would have to import textile processing knowhow from China if it was to re-establish its textile industry, he said.

“With what’s going on today, I don’t know if that would be possible in the foreseeable future.”

He said early stage processing equipment is also very wool-specific, large and expensive, whereas spinning machines can often be adapted to handle many types of fibres. The knowhow in processing equipment is also primarily in China today, with New Zealand having the one exception, Mr Jackson said. Some Australian plants with European ownership also failed due to union and staff troubles.

Where to with wool marketing….

As for marketing wool in the current market, Mr Jackson said it is difficult because conditions are changing daily due to the COVID-19 pandemics impact on global economies.

Mr Jackson said most apparel retail clients had record online sales in May and June, but then volumes “dropped off a cliff” in July, perhaps because of shops re-opening, less discretionary income among people who have lost jobs or are concerned about their financial situation and are focusing spending on essentials.

“Wool also is very seasonal, it is an Autumn-Winter fibres and most of the woollen products are sold in the Northern Hemisphere,” he said.

“In the Northern Hemisphere, the main markets for our Chinese clients, the United States and Europe, have almost stopped.”

He believes there is little value in marketing wool until the COVID-19 situation improves globally.

The four Chinese companies he works for sell yarn and fabric to most major retailers in Australia and New Zealand – for suits, sweaters, sports and outdoor wear. In early July, he was fielding strong enquiries from Melbourne for yarn and fabric catalogues, European colour and fashion trend information, but then it died due to the COVID-19 pandemic. He said online sales have not offset the losses from the lack of retail foot traffic business. 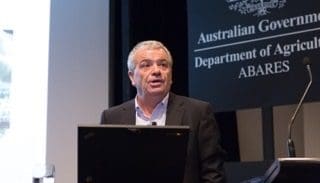 Mr Jackson said the first opportunity for Australian wool post-COVID will come from China’s economic recovery and there are some early signs its economy is bouncing back.

Key areas of growth are likely to come through the increased interest in sports wear in China with the country building several ski resorts, including the world’s biggest indoor complex and the young people are now more interested in outdoor activities.

“They’ve got 350 million people who can afford to buy wool products.”

He said there has been a resurgence of good quality domestic brands in China.

“They are much more keen now to buy much more quality stuff, the same with the beef.

“The biggest protection we’ve got is that Australia produces about 80pc of the world’s apparel wool – wool going into clothing – so we (my Chinese clients) can’t go anywhere else,” he said.

Not enough non-mulesed wool being produced

However, Mr Jackson said his Chinese clients have been buying more wool from Argentina and South Africa in the past year, but simply because of orders for non-mulesed wool accredited under the Responsible Wool Standard.

“We have to buy more wool for these other countries, but there still isn’t enough.”

The finest wool his clients buy comes from New Zealand, but in small quantities, because 95pc of the country’s wool is coarse crossbred, mainly suitable for carpets.

“If there was some other country producing fine apparel wools in the quantity of Australia then we would have a real problem.”

“Absolutely, because even last year we got to a point where the manufacturers I work for couldn’t even find enough RWS wool, even though that wool at yarn stage worked out 12pc more expensive.

“I think there are only 11 (RWS) growers in Australia, whereas there are 39 in Argentina.

“But Argentina has fewer wool growers, but they tend to be really big properties, whereas Australia has more growers, but most properties are quite small.”

Mr Jackson said he has been doing more direct sourcing of wool from farms through other non-mulesed assurance systems.

“The big trend until the COVID-19 pandemic was traceability, every company in the America and Europe wanted to do a traceable story – farm to fashion or sheep to shop.”

He said it was virtually impossible to satisfy the traceability and wool volume needs by working with individual farms in Australia, so the provenance story is based around “lead” farms and quantities are made up by blending wool from other properties to meet specifications.

“But how can you do a beautiful supply chain story when you’ve got a skeleton in the cupboard?

“It’s like saying you go to church every day, but you murder somebody once a week.”

The “skeleton in the cupboard” is that Australia is now regarded as a mulesed wool country, Mr Jackson said.

“We should have started explaining more clearly back in 2004-2005, but you can’t even mention it now.”

Mr Jackson said it his experience that there is “no chance” of the Australian wool industry resurrecting its reputation by mandating pain relief for mulesing.

“Remember most of our customers decision-makers are based in cities like New York and London and have probably not seen a sheep in their life.

“Point number one is non-mulesed…,” he said.

The rise of the sustainability manager

Wool traceability is now not just about knowing where wool comes from and sustainability includes sheep welfare, he said.

“These people didn’t used to be so important, they were linked to HR and looked after health and safety, and nobody went to visit them.

“Now the sustainability manager has become much more important, they have to present to the board and is answerable direct to the CEO.”

However, Mr Jackson said sourcing RWS-certified non-mulesed had challenges, including the lack of supply and the cost. RWS is the most comprehensive farm-to-retailer scheme, but wool was also sourced from other non-mulesed supply chains, he said.

“The processors I work with can only find and buy small (RWS) lots, so we don’t get the economies of scale in processing – we want to do 50 tonne lots, not five tonnes.” A proud Jimmy Jackson when his client Xinao won the gold award for the most innovative new yarn at the world’s largest sports outdoor fair ISPO Munich.

Mr Jackson said when he started in the wool industry, the fibre had a textile market share of 14pc. This has shrunk to about one percent and he believes it will be a long struggle out of the COVID-19 pandemic which has hit global economies and the apparel trade hard.

He points to Australia’s “reserve price fiasco” from which the processing sector took 10 years to recover from.

“So many manufacturers disappeared because of that reserve price scheme; basically it wiped out most of the European manufacturers within a year.

“Some manufacturers will disappear, even Chinese ones.”

“We need more innovation, otherwise it is just generic marketing.

“I don’t see any new products coming from us (Australia),” he said.

“Icebreaker started with the base layers and now we’ve got Allbirds with the shoes.”

Mr Jackson said Australian wool growers should work together and lift non-mulesed production to improve their returns and the reputation of their wool internationally.

“They seem to be always arguing with each other.

“The wool we buy on behalf of Chinese customers we buy from 13.5 micron to 28 micron and everybody wants non-mulesed.”

Mr Jackson said the lack of non-mulesed wool supply has also been a factor in the increasing switch to other fibres or to blending over recent years, rather than use wool from flocks that have ceased mulesing or have used pain relief.

“And the blended yarn also has to have a good story, so we’ve got yarns now with recycled PVC, recycled water bottles and biodegradable nylon.

“It’s a lost supply opportunity (for wool) because it is cheaper as well.”

Mr Jackson said the companies he works for a taking time during the pandemic slowdown to create innovative yarns and fabrics and Australia should do the same.

“I worked with some great people in the past and they said use this time for innovation.

“You start thinking out of the box when you’ve got more time.”