All options on AWI’s table to solve sheep shearing crisis 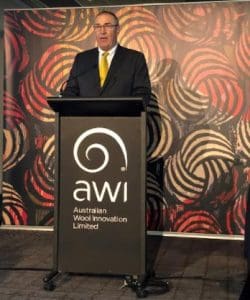 Despite expected relief from ag visa worker developments and rebates on backpacker visa fees, the impact of COVID-19 worldwide and domestically on cross-border movements has continued to exacerbate the nationwide shearer and shedhand shortage.

“For the last four years we’ve been prepared to invest in anything that would try to help rectify this problem.”

But Mr Laurie said AWI and the industry had been unable to come up with any innovative ideas, domestically or internationally, to really overcome the problem. 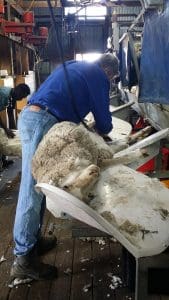 A sheep being shorn on Burbidge platform.

Mr Laurie admitted AWI needed to further concentrate on the option of upright shearing platforms, as developed by New South Wales grower Grant Burbidge, while it continued to do as much shearer training as it could.

Mr Laurie said he has spoken with Mr Burbidge about the shearing platforms and viewed his video, and he believed people from AWI had “engaged in this space.”

“But from a company and industry point of view we need to invest in multiple options.

“This is about getting sheep shorn, management of flies and general management issues.

“If we are talking about getting sheep shorn on time, we need to provide multiple tools, multiple options – whether it be Bioclip (chemical defleecing) if we can use that, platforms, training, new sheep (catch and drag) delivery systems – a whole range of things to make it easier.”

Mr Laurie said AWI is already investing in many of the options he listed.

“As a board we have got to sit down and have a serious discussion about this and that will be happening at the end of the week.

“We really need to understand where the pressure points are and I’ve asked the company to do some work there,” he said.

He said the industry might need to look at whether shearing times in some areas is an option.

“We’ve already been doing, with the Wool Industry Consultative Panel, work with the government in regard to COVID issues and getting overseas workers in.”

Mr Laurie said AWI hasn’t had any success in finding viable options outside the conventional shearing industry to solve the wool harvesting problem.

“If somebody came to us with something that could break this, we are prepared to invest in it.

“The company has always been prepared to invest in good ideas that could actually change the dynamic when it comes to shearing.”

Mr Laurie said the broader industry also needed to “step up”, with contractors and flock owners being prepared to put on learner shearers, and shed and accommodation conditions need to be “up to speed” to attract and keep workers.

The AWI leader said AWI is also ready to collaborate with other levy-funded organisations such as Meat & Livestock Australia and Animal Health Australia in implementing solutions.