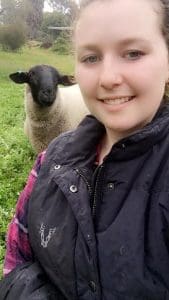 WAFarmers said the strategic importance of WA’s agricultural colleges in developing career pathways has been highlighted ahead of next month’s Australian Intercollegiate Meat Judging Competition at Wagga Wagga in New South Wales.

Kira, 19, will be a member of the Murdoch University IMJC team for the first time, following up on the 2015 team’s top performance in six categories evaluating beef, lamb and pork carcases, primals and retail cuts.

Before commencing her tertiary studies, Boddington resident and ICMJ teammate Kira said her love of the industry was influenced by growing up on sheep and cattle farms at Bridgetown and Boddington during her secondary school years.

“I attended Narrogin Agricultural College and loved it there; that is when my interests in agriculture really grew.

“I have since started my own Suffolk stud and am aiming to produce animals that carry a lot more muscling throughout their carcass, therefore improving the animals’ yield,” she said.

Kira said she hoped to not only gain the skills to correctly judge a carcase and how to interpret market specifications, but also to increase her networks with fellow ICMJ competitors and industry professionals. At the Wagin Woolarama in March this year, Kira qualified to compete in the junior Poll Dorset and wool judging competitions at the Perth Royal Show in September.

Kira said she has always been interested in  sheep research and genetics.

“But since taking part in the training for ICMJ, the meat science Industry is looking very interesting and like a possible area to base my career in.”

WAFarmers chief executive officer Stephen Brown said the organisation was pleased to hear that some members of the 10-person Murdoch University ICMJ team had completed studies at an agricultural college prior to undertaking tertiary studies in animal sciences or other agricultural-related fields.

“The support of agricultural students in secondary and tertiary institutions will not only work towards our goal of creating a viable, profitable and sustainable future for the industry, but will open up opportunities for them to gain significant industry exposure and broaden their understandings of the sector.

“We recently announced a partnership with the Department of Education WA to provide Agricultural Ambassador Scholarships to Year 11 students at agricultural colleges, and we hope that students seeking to apply will follow the ICMJ closely to see what opportunities are available for them later in their educational journey.

“This relationship between secondary students and tertiary students is so important – there is great value to be gained for the younger cohort by looking up to their contemporaries in the industry.

“Therefore, we must support students at the grassroots level to ensure they gain vital exposure to the agricultural industry and, hopefully, choose to pursue a career in the field.”

Kira said the agricultural ambassador scholarships as a good idea to help cut education costs for students. Young people in rural areas needed to be supported to study at agricultural colleges and enter the industry. The colleges were often their only option for secondary education, and they often bring fresh and exciting ideas to the table regarding farming practices and production gains, she said.

The WA ICMJ team will travel to Wagga Wagga in early July to represent Murdoch University in their 10th year of competition. Kira said she was also looking forward to doing a week’s work experience at Bryan and Lucinda Corrigan’s Rennylea Angus operation near Holbrook during her trip east. The 2016 Murdoch University ICMJ team is sponsored by WAFarmers, Harvey Beef, Linley Valley, The Royal Agricultural Society of WA and Murdoch University.