YOUNG sheepmeat ambassadors have told their stories on video to represent their industry on a three-country tour this month.

New South Wales sheep manager James Corcoran, 27, and Ben Munzberg, 22, from Victoria, were named as the 2016 Sheepmeat Industry Ambassadors by the Sheepmeat Council of Australia, at the Lambex 2016 conference in Albury.

The award is a joint SCA and Meat & Livestock Australia project recognising young leaders. It involves a study tour from August 7-19 this year as part of the Tri-Lamb agreement between Australia, the United States and New Zealand. The study tour of Australia and New Zealand includes ambassadors from the US and NZ.

James and Ben will participate in the TriLamb Group Young Leaders Program in 2016 and 2017 and will be mentored by 2014 SCA ambassador Jamie Heinrich and SCA President Jeff Murray.

SCA skills development and communications manager Kathleen Allan said the ambassadors had to describe their vision and outline any challenges for the industry in a Youtube clip.

“It is something that we did that is quite different…both these guys did great videos.”

James, from Gooramma Poll Dorsets at Galong, NSW, said the award is a great opportunity to gain knowledge and further build on the networks with producers in the United States and New Zealand.

He was passionate about the industry, which had plenty of opportunities for all types of skills from farming to processing. The ambassador program would help the industry maintain a strong workforce.

“It’s an exciting time at the moment, we are making extraordinary money at the moment and producers are getting at record prices at the saleyards.”

James said all young people should have a say in the industry because they would be the future leaders. Industry challenges included consumer perceptions and animal welfare, he said.

“Protecting our image is paramount for succession in the industry.”

Following his completion of a Bachelor of Veterinary Bioscience, James took up a role as market operations officer with AuctionsPlus, liaising with buyers, agents and producers. He then worked as a project officer with the National Meat Industry Training and Advisory Council where he provided research, training development and advisory services to the red meat, pork and game industries.

In 2015 James decided to return to the family property where is now involved in the day-to-day operations of Gooramma Poll Dorsets and manages the commercial sheep operation. He is developing branding and marketing initiatives to further promote the stud.

All producers have the same targets

Ben said he wanted to get out and learn from the American and New Zealand industries. He sees plenty of opportunities with the technology advancements and wants to see how the data generated in a commercial situation can be used to generate the best returns on farm.

He said the award is a fantastic opportunity to visit different farms and operations and talk to people from the United States and New Zealand.

“It’s a great insight into their industries and how they operate.

“We’ve all got the same target of increasing lamb consumption and increasing productivity,” he said.

Ben studied a Bachelor of Agricultural Science at University of Adelaide. After completing his study, Ben was employed as technical officer – lamb production with the Victorian Department of Agriculture, providing technical support to research projects focusing on improving the productivity and profitability of lamb producers in the high rainfall zone. He then decided his main interest was in farm management and is now employed by a large family farming business in northern Victoria, running a 10,500-head Merino and first cross ewe enterprise alongside cereal, canola and pulse cropping. 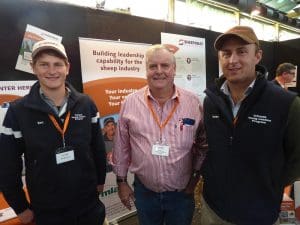 Mr Murray said both winners were worthy recipients because of the leadership qualities they displayed and their commitment to improving the sheep meat industry.

“The Sheepmeat Industry Ambassador Award recognises outstanding young sheep producers and their potential as industry leaders and both Ben and James were incredibly passionate about the sheepmeat industry and displayed maturity beyond their years in articulating a vision for its future,” he said.