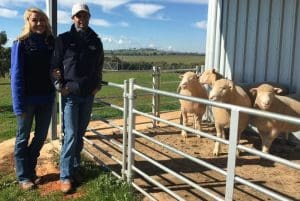 Although there is no formal TriLamb agreement between the three countries on lamb promotion, the countries work together on marketing and building their relationships, especially through the TriLamb Young Leaders Program.

Utah producers Brad and Jen Osguthorpe were among young sheepmeat industry leaders from Australia, New Zealand and the United States getting a taste of lamb production ‘Down Under’ as as part of the program. They want to learn how the countries can work together to get lift lamb consumption around the world.

“There has been this big disconnect we feel, between the countries, and we need to bridge that and build that relationship.

“If we could more lamb into people’s mouths that would make a big difference,” she said.

“If we could all work together instead of building fences and get better communication to get more people on board,

“Working together is import to help grow this industry,” he said.

The Osguthorpes are part of a large family-owned commercial rangeland operation across more than 100,000 acres of private and public land, running about 10,000 Rambouillet, Suffolk and Merino ewes and turning off about 7000-8000 lambs annually.

They said they wanted to network with Australian and New Zealand producers, studying new systems and practices. Ms Osguthorpe said many American did not consumer lamb except on special occasions.

Mr Osguthorpe said US sheep numbers have been declining for years, but were beginning to “flatline” and last year numbers lifted slightly, but the cattle industry is more dominant.

The Utah producers were not overly concerned about the advent of UK lamb into the US market.

“On the other hand if we are getting more lamb into people’s mouths and once they taste that lamb they might come back and spend a little biut more and buy that American lamb.

“That’s the way we’ve got to look at it, instead of ‘No, we can’t have that Australian, New Zealand or UK lamb.”

The 20 delegates on the TriLamb tour that started in Canberra today, will embark on a two-week program, touring Australia and New Zealand, including attending Australia’s premier sheepmeat industry event LambEx 2016, as well as visiting showcasing the industry supply chain.

The group travelled via Wagga Wagga to Albury, New South Wales, today, stopping at research, seedstock and commercial operations along the way to LambEx. These include the South Eastern Livestock Exchange at Yass, Gooramma Poll Dorset stud at Galong, the Graham Centre and Kyeamba Station at Wagga, and the prime lamb seedstock business Lambpro at Holbrook.

Delegates will travel to Sydney on Saturday and then depart to New Zealand for a series of farm and industry site tours and events.

Ms Allan said the program includes a range of industry-based events and opportunities to develop and share knowledge of sheepmeat production and practices.

“We want to encourage these young leaders to build networks and partnerships as they take on industry leadership roles in future.

“Exposure to other countries and their production systems will help to broaden their horizons and provide a global picture of the lamb industry and its potential for growth,” she said.

It was formed to collaboratively explore opportunities to enhance the profitability of the lamb market in the United States and develop a closer working relationship to gain a deeper understanding of each country’s industry issues. This relationship has strengthened over the years to focus on increasing consumption of lamb in the US through collaborative marketing programs.

The TriLamb Agreement’s goals are to:

– Improve demand for lamb in the United States.

– Strengthen the sheep industries in all three countries by taking action to ensure that markets in each country are at a level that will be profitable for each segment of the industry, especially producers.