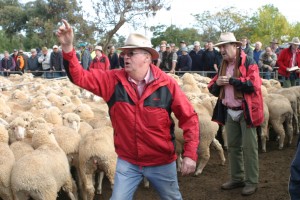 Elders Wycheproof manager Jim Coffey, takes a bid for auctioneer Kevin Thompson, behind him at the Whycheproof sale. Click on image for a larger view.

NWVBSA-accredited lines eligible to go into South Australia made the top prices, underpinned by SA agent competition. Elders auctioneer Kevin Thompson sold young first cross ewes to $187 and Merino ewes with lambs for up to $191 in the yarding of 8000.

“We had strong competition on the accredited lines from South Australians without them buying large numbers,” Mr Coffey said.

“But they certainly kicked competition along on those sheep out of the North West Victorian Biosecurity Area.

“It did make a lot of difference, we certainly got paid for having the biosecurity sheep,” he said.

“We had three or four carloads of agents from south-east South Australia – we haven’t seen that here for years.”

Mr Coffey estimated South Australian competition underwrote a premium on some lines from the North-West Victorian Biosecurity Area of $10-$15 above rates for similar quality non-accredited lines in the sale.

“On those better quality pens that were eligible we had good South Australian competition.”

He said the Wycheproof spring sheep sale rates had been $20-$50 behind Naracoorte prices for years, under previous OJD management arrangements.

“It was just good to have that South Australian contingent here, especially looking towards our spring sales.

Flocks in the NWV Biosecurity Area are accredited as having a low prevalence for the sheep wasting disease OJD, including in the local government areas of Gannawarra, Yarriambiack, Mildura, Swan Hill, Buloke, Hindmarsh and parts of the West Wimmera Shire Council.

Under the new national OJD program, NWVSBA-accredited lines in the Wycheproof sale could be sold into any area of Australia, including South Australia, where the entire state is regarded as a biosecurity area, and into other OJD biosecurity areas in New South Wales and Queensland.

NWV Biosecurity Group chairman and Ouyen stud breeder Kevin Crook said the selling of accredited sheep at Wycheproof had re-opened a traditional trading route for NSW and SA-sourced store sheep to be fattened on north-west stubbles for re-sale to interstate buyers.

“The South Australians at Wycheproof put a floor in the market that had been missing.

“It definitely helped those non-accredited sheep as well,” he said.

South Australians were losing bidders on Wycheproof producer Graeme Allan’s 113 one-year-old November shorn first cross ewes at the sale. The biosecurity-accredited ewes were scanned in lamb 100pc to Poll Dorsets and sold for the sale’s top first cross price of $187 to a client of Ballarat agent TB White and Sons.

The Merino ewe run was topped by JP and JK Durie’s 278 three-year-old November shorn ewes, with 292 Poll Dorset lambs at foot. The biosecurity-accredited ewes sold for $191 to an FP Nevins and Co. Client. Nedra Pty Ltd sold 239 unaccredited three-year-old September-shorn Collinsville blood ewes, joined to White Suffolks, for $186 to an Elders Jeparit client. Other unjoined one and two-year-old Merino ewes generally made $136 to $164.