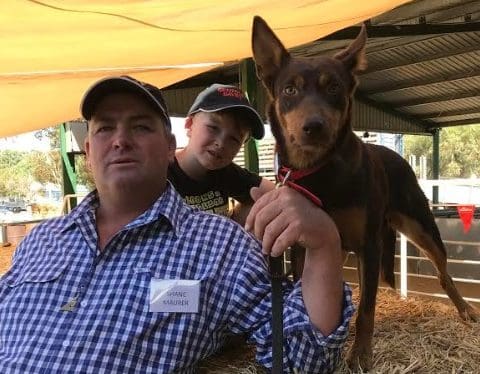 Shane Maurer with and $25,000 dog Possum and son Toby at the Jerilderie auction.

The bitch was offered as joined to Matt Sherwood’s well-bred and performed station, open and championship trial dog Boco Wonder, or with a free return joining if not pregnant. Possum is by Capree Dually out of Milburn Molly and was bought by Shane as six month-old pup.

The bitch’s price also came within a few thousand of the world record price of £14,700 or A$27,137 paid for a working dog bitch at the Skipton Auction Mart in North Yorkshire on February 22. An American buyers bought the two year-old tri-coloured collie bitch Brenna from Northumberland shepherdess and media star, Emma Gray, 33.

Strong interest for a strong bitch

Shane Maurer knew there was interest in Possum from five people before the sale, with four bidders including Dwayne and the losing bidder, an unknown “sleeper”, taking bids to $25,000. He believed Possum would join the Gelven breeding program and be a back-up sheep and goat dog. The bitch has worked sheep and cattle on the Maurer family property between Young and Temora.

“She is just a really good strong little bitch – she’s nice and calm and correct.

“She’s not your big powerful real sheep-moving type dog, but she is a really strong correct little bitch,” Shane said.

“I think people are starting to realise that with a good bloke with a couple of good dogs, then can be a man down,” he said. 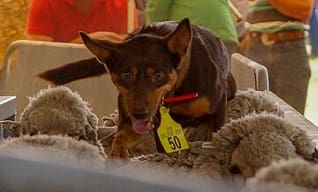 After being told Possum’s price had missed out setting a world record for a working dog bitch by a few days and few thousand dollars, Shane said: “So at sometime this year I could have a world record.”

After working dogs for nearly 30 of his 47 years, Shane’s profile in the working dog world has grown rapidly since he won the 2017 Australian Yard Dog Championships with his nine year-old semi-retired Kelpie Getitdun Davey, sold the record $14,000 dog at Jerilderie last year and scored a dog food sponsorship deal.

“There is a lot that comes out of having the top dog on the day and if you break the record that’s a bonus.

“You dream of these things happening with your dogs, but when it actually happens, it is pretty unreal really.”

Shane said he sold Possum to retain his leading position in the Jerilderie auction because he had better dogs at home and he wanted to continue to top the sale with a quality dog, though not necessarily to break any records.

“At the end of the day, whether you are trialling or selling a dog, you want to be at the pointy end of the top positions, so she was the bitch that could do it and she was a bitch I could do without because of the team I’ve got.

“The payday is great, but having two buys think my dog is worth that much is even better.”

Jerilderie auction co-ordinator Warwick Doolan said the sale might generate a world record priced dog in the next 2-3 years.

“I think in the next 2-3 years we will probably see prices reach that height more regularly, but at the moment $15,000 if a still a very good price for a well-trained dog.

“Obviously this bitch has reached dizzying heights because it is probably the first bitch ever offered for sale in pup in Australia.

“As we’ve seen it has taken 10 years to get the price to deviate substantially from around $10,000 – an Australian record three years ago was $12,000, so the record price has more than doubled in three years,” he said.

“You can easily suggest that in three years’ time $25,000 is going to get closer to being a more commonplace sort of price for the special dogs,”

“It is now pretty well accepted that if you want a good solid all-round dog you have to start thinking $10,000-plus,” Warwick said.

“It is to the benefit of buyers and breeders and trainers for that to happen, because if you work out the hourly rate on a $10,000 dog, it is still only about $7.50 an hour to get them to that point.

“With the cost and hours invested at $10,000 you are still only just getting, you’ve got to be loving, you wouldn’t be doing it for a living, put it that way.” Shane credited Dwayne Gelven with convincing him to sell his dogs at the auction, despite buying them for years privately at $5000-$7000.

“That’s how genuine a bloke he is.

“He said I’m mad telling you, because I will have to pay more for them, but I’m prepared to pay what I need to pay to buy them because you need to be rewarded for what you are doing,” he said.

“He talked me into putting my dogs into Jerilderie and then he backed it up by buying four of my dogs from the auction over the last two years.”

With 52 dogs listed on AuctionsPlus at Jerilderie this year, Elders auctioneer Nick Gray and his colleagues sold 46 for an average price $5979, up $1639 on last year’s sale.

There were six dogs that sold for more than $10,000, including $17,820 for a two year-old trained station bred Kelpie owned and trained by Michael Joss that sold to Western Australian buyer bidding on AuctionsPlus.

Adam James sold Kingsley Chevy for $12,500 to local Finley pair Will and Jack Sexton. Chevy will be used by them as a breeding bitch for their stud Cango Kelpies. Berrigan’s Denis Mitchell also had success selling two dogs for $6600 and $7150 to a buyer from Oura.