WORLD shearing record attempts will resume in 2020 this weekend with an attempt on the single-stand eight-hour Merino ewe record in Western Australia.

Referees will be convener Eddie Archer from South Africa, with Mark Baldwin from NSW, Mike Henderson from Western Australia and David Brooker from South Australia. 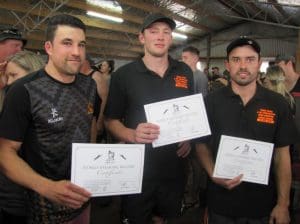 Clayton’s record attempt follows the breaking of the world three-stand strong wool lamb shearing record by three New Zealand shearers on December 23.  Shearers Coel L’Huillier, Kaleb Foote and Daniel Langlands averaged more than 20 lambs every quarter-hour each to set a new mark of 1976, comfortably passing the previous mark of 1825 with about 40 minutes to go.

Shearing at Ingleby Farms’ Puketiti Station, the 33 year-old L’Huillier topped the individual tallies with 677, getting his name into the World Sheep Shearing Records Society’s books for a third time. Foote, a 25 year-old former New Zealand intermediate shearing champion, shore 667, and Langlands, 28, cruised past his goal of the first 600 of his career and finished with 632.

It was the second world shearing record broken in New Zealand in just over a fortnight, with Canadian shearer Pauline Bolay setting a new women’s eight-hour record of 510 lambs on December 7. Clayton’s first attempt was on March 30 last year when poor weather contributed significantly to him falling 14 short of the then-previous record of 466 set by New Zealand-born Western Australian shearer Cartwright Terry in 2003.

Josh comes from Young, NSW, and shore separate two-hour runs of 114, 115, 115 and 108, to fall 14 short of mentor Terry’s mark, only to see another 31 added to the challenge with a new mark of 497 set by Australia-based, Hawke’s Bay-born Lou Brown on April 27 last year near Kojonup, also in Western Australia, with run tallies of  120, 126, 126 and 125. Brown averaged under 58 seconds a sheep and was the first to average under a minute a sheep in a Merino ewes or wether shearing record attempt, Mr Laing said. 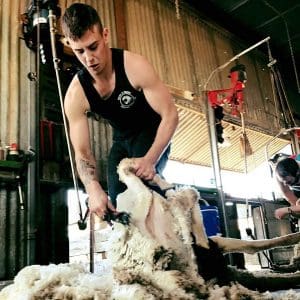