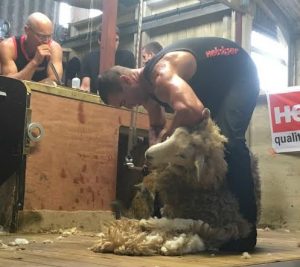 AN ENGLISH farm is set to host a second world shearing record attempt in a week on Saturday.

The attempt by Irish shearer Ivan Scott on the world nine-hour strongwool lambs record has been postponed due to wet weather at Trefranck Farm — where Kiwi gun Matt Smith put his own mark on history earlier this week, setting a new nine-hour record for strongwool ewes of 731.

Scott had been set to start his bid for the world nine-hour strongwool lambs record at 4pm NZ time Friday (5am UK time or 2pm ES time in Australia), before wet weather postponed the attempt for 24 hours at Trefranck Farm, near St Clever in the southwest of England.

The dampness of the lambs, many of them progeny of the ewes shorn by Smith on Tuesday, meant they were not ready in time for a pre-record shear before the three World Sheep Shearing Record Society, in which a sample of the lambs would have to shear an average of 0.9kg of wool each for the attempt to go ahead.

Scott, 35, from County Donegal in the Republic of Ireland, is targeting a record of 866 lambs, set by Hawke’s Bay shearer Dion King in a King Country woolshed in the Central North Island on January 10, 2007. That’s 37.41 seconds a lamb, caught, shorn and dispatched.

Scott has already been successful in two bids in New Zealand for the eight-hour record, and is the current holder with a tally of 744 shorn in a woolshed just east of Taupo on January 9, 2012.

NZ shearer Matt Smith smashed the world strongwool ewe record at Trefranck Farm three days ago with a tally of 731 in nine hours, in the first world shearing record bid ever staged in the Northern Hemisphere.

The eight and nine hour days are based on standard woolshed days  in New Zealand woolsheds, the nine-hour day spanning 12 hours of the day, comprising a two hour-run to breakfast, followed by three runs of 1hr 45min, with half-hour breaks mid-morning and mid-afternoon, and an hour for lunch.

King, a competition shearing champion who had won the coveted Golden Shears Open final in Masterton just 10 months earlier, and in 2015 won the New Zealand Championships Open final in Te Kuiti. He now also farms in Wairarapa, just east of Masterton, the home of the Golden Shears.

Scott is also a champion competition shearer, with multiple titles in the UK, while his biggest win in New Zealand, where he mainly works for Rotorua contractor Jeff Dorset, was the New Zealand Corriedale Championships Open title in 2014. Mr Dorset is in the UK managing his record.