Sales increased sharply on Wooltrade last week as the market lifted for most micron types and rose up to 10-15 cents for 16 to 19 micron wools.

“The 18 micron Merino fleece was selling for up to 1314c/kg, about 15 cents above the indicator for good spec wool, the 20 micron fleece lots made up to 1185 cents, but most sold at 1170c where the indicator is, and 21 microns were just a whisker under that price.”

“But back then just three weeks passed and the EMI was at 993c. Ouch!”

The good news is that demand on Wooltrade was brisk on Monday, but he couldn’t see the market following suit this week, Mr Benson said.

“In fact quite the contrary, with a sustained lower Aussie dollar-US$ exchange rate the market in the short term is looking healthy, but further out there seems to be growing competition from competing fibres like cotton and synthetics in terms of price.

“Taking some of the risk out of the market might be a smart decision right now by looking at forwards, basis contracts or selling your store held wool on Wooltrade to catch current market spikes.”

Mr Benson said there is a good chance this week of 20 and 21 microns testing 1180c/kg clean, based on early sales.

“No crossbreds or carding lots sold last week as they are on short supply on Wooltrade, but on the AuctionsPlus Wool Auction these lots were again red hot with 5-10c greasy added on,” he said. 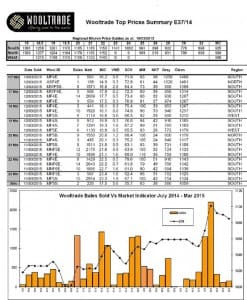