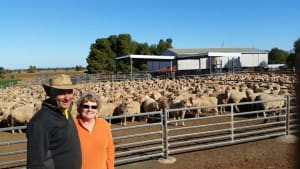 West Wyalong woolgrowers Jeff and Elizabeth Gould have made Wooltrade an integral part of their cropping-wool business model.

The Gould’s main business is cropping, over about 1700 hectares, but they also run just over 2000 Kenilworth-blood Merinos on about 285 hectares, producing about 60 bales of wool a year.

“I have a great belief in the wool industry and we’ve been purchasing rams from Tasmania for about 18 years.

“We’ve got a good team behind us; I’ve been selling through Jemalong Wool since I left school.”

Wool is stored to to be marketed as market lifts

Mr Gould said the flock’s oddments are sold annually on the physical market to meet immediate costs, but the fleece wool is valued as a “backstop” to the cropping operation, with lots sold progressively on Wooltrade as prices spike.

Mr Gould said his business model enabled him to keep wool specifically for these spikes and as a security for any potential fall in cropping income.

“If the price is not right we just put it on hold.

“We utilise wool as a backstop,” he said.

“We put a lot through auction, but because wool has been the way it has for the past 10 years we just hold it up and when the job’s right we sell it – if it doesn’t go it doesn’t matter.”

Mr Gould said he was prepared to store wool and wait for prices to reach his “markers” or realistic reserves, sometimes setting up to three price markers across various lines from 30-120c/kg above the physical market levels.

“I don’t believe the wool has hit where it is going to hit; I believe there is plenty of room north of where we are,” he said.

Mr Gould said the recent price rises have enabled them to sell about two years’ wool production in the last 12 months, mostly in recent weeks. But Mon Repose still has a couple of year’s production in storage and recent wool prices are not sufficient to lift sheep numbers beyond his planned gradual increase.

“We never change in a rush, only in increments. We don’t buy stock in, except for rams, so it is just natural increase here,” he said.

“I won’t say this (price increase) is a flash in the pan, because it will last longer than that, but the wool industry is very cyclical and this is just another cycle.

“It may last longer than most because the Merino numbers are not on the ground – there are just enough people gone into Dorpers, goats and cattle now to make it worthwhile for the rest of us to maintain what we are doing.”

“With 35,000 bales on offer this week nationally at the physical auctions, anticipation is rampant to see if these levels will be maintained,” Mr Rookyard said. 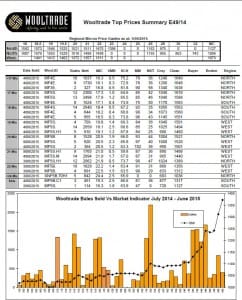