“For five weeks the wool market has given strong returns for wool producers, but last week delivered the icing on the cake with several microns recording 80-100 cent-plus price rises.”

“In this time, Wooltrade has sold 6312 bales of producers’ wool and we would need to wind back the clock to 2011 to see these prices and this amount of buyer competition.”

Mr Benson said Wooltrade now has just 3300 bales listed after selling 4624 bales in the past month, showing the level of demand for wool.

“Growers need to consider their options if they are holding wool as many price levels above 17 microns are approaching record levels.”

“A solid result for a quality offering.” 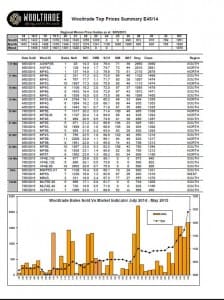