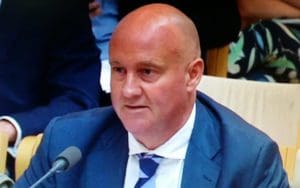 AUSTRALIA’S peak wool grower body has sought the release of a report into the ‘man in the mirror’ incident involving Australian Wool Innovation chairman Wal Merriman.

In his opening statement to a Senate Estimates hearing in Canberra yesterday, Mr Merriman gave an account of his attendance at an AWI-funded genetics research focus group in Sydney on June 15, in which he observed Merino breeders behind a one-way mirror without their knowledge.

AWI chief executive officer Stuart McCullough then said he sought Mr Merriman’s permission to engage some directors – Colette Garnsey and Meredith Shiells – to look into the processes involved with the focus group “and what went wrong.” Mr McCullough agreed to table the report at the hearing.

“WPA believes that the AWI report should be released to help clarify how this unfortunate incident unfolded, as we do not accept the reasoning so far provided from AWI.”

A seemingly recalcitrant Mr Merriman opened the Senate Estimates hearing before the Rural and Regional Affairs and Transport Legislation Committee, recognising that “it’s fair to say that AWI has had a difficult few months, mostly caused by me.”

“As chairman I take my responsibility very seriously, we are passionate about this and yes, at times, it could be argued, we could do things differently.”

He acknowledged he had critics in the industry.

“You don’t do these jobs without getting criticism.

“At all times we endeavour to invest growers and government levies with the utmost probity and accountability.”

Referring to the AWI-funded genetics focus group run by Axiom Consulting in June, when he observed Merino breeders without their knowledge behind a one-way mirror, Mr Merriman said the incident “didn’t hold up to mine, the board’s or AWI’s expectations in this regard.”

“It was not one of our proudest moments and I can assure you that a number of actions have been taken to ensure that it never happens again.

“All parties involved, AWI and the consultants did not meet best practice or the sensibilities of wool growers which we refer to in the company as the wool grower test.”

He said Axiom had written and apologised to the focus group participants “and re-affirmed confidentiality.”

“AWI has written to all Australia wool growers and explained the situation.

“I have also written to the participants of the focus group I observed and apologised.”

Mr Merriman declared that “never before have meetings been held in a room with a one-way mirror.”

“This was all very strange to me when I went to observe the process.”

“If the AWI board knew such a room was booked, it would never have taken place; we don’t do things this way,” he said.

Mr Merriman said “it was my mistake not to insist to be in the room, I take responsibility for that”.

”When I got there they said you’ve got to go over here and observe I should have said “no, this is not the way we do things,” he said.

“I was advised by staff and consultants to go in that room and observe and I shouldn’t have, I should have said ‘No, we don’t do it like this’ and I apologise for it.”

“My presence not being fully declared by Axiom Consulting as an AWI observer is not the way I operate,” Mr Merriman said.

“Those that know me, know that I do not hide.”

Mr Merriman tabled the apology and AWI letters for Hansard and said the key findings and recommendations of the AWI investigation were delivered to the board in October.

“The board endorsed those findings and asked the CEO to address those and report back on an implementation process.”

Sheep Central has been told the Senate committee would have to approve the release of the report.