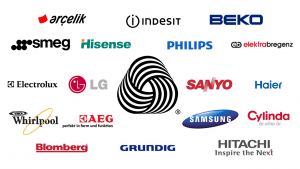 Woolmark is used by eight of the top 10 washing machine makers.

AUSTRALIA’S iconic Woolmark has been cleaned up and is washing its way to financial success on behalf of the nation’s wool growers.

The Woolmark is the primary focus in AWI’s wool marketing strategies around the world, but also eight of the top 10 washing machine manufacturers use the Woolmark logo as the (wool) wash cycle, he said.

“The more washing machines they sell, the more money we get; good revenue to have, sticky money that — really sticky.”

With the wool levy paid by growers at 2 percent, the Federal Government’s unique R&D matching contribution amounted to about $13 million a year.

“The Woolmark licensing business creates about $10 million worth of revenue for you, for the company and we put that back into research and marketing.

“That is a good strip of revenue once it outstrips the government and we are planning to grow it.” 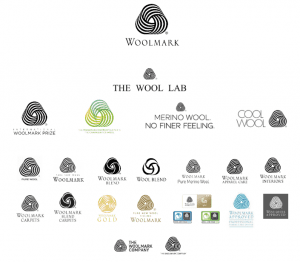 Woolmark before the clean-up.

Mr McCullough said the branding and architecture of the Woolmark logo had been cleaned up over the last 12 months.

The original Woolmark logo in 1964 had the words “Pure New Wool under it, but “some marketing genius” put the word Woolmark under it in the 1980s, he said.

“I’ve turned that clock back and gone back to the words ‘Pure New Wool’ and I’ve done that because it is the essence of the brand, it advertises the fibre, not the company,” he said. 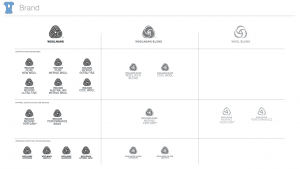 Woolmark after the clean-up.

Mr McCullough believed that the new Woolmark will have some cachet with young consumers.

“We think that that young consumer – Gen Y – who has always heard about wool being itchy and scratchy, and dirty and the thing that your grandmother knitted, might go ‘Gee, there’s a new wool, there is something new in wool out there.

“So all the advertising will be focussed around ‘Pure New Wool’ from now on.”

Mr McCullough said before the logo was cleaned up, Woolmark’s brand architecture was “all over the shop“; in a range of colours, fonts and sizes.

“(There were) even some that I didn’t recognise.”

Woolmark use is growing again

Now, for the first time since 1996 the volume of licensees and the value of licensees is going up; it’s a significant amount of revenue, Mr McCullough said.

“And we doing that with pretty much zero effort – we are not knocking on doors begging people to buy licences.

“They are coming to us with cheques.”

Logo use and licensing income was growing because AWI was profiling the Woolmark logo.

“We are using it as our marketing mechanism in the Northern Hemisphere and they are seeing recognition and they saying “I want to put this on my garments, here’s a cheque, every year.”

Mr McCullough said the garment manufacturers only do what they are told by the retailers, who were requesting garments with the Woolmark logo, which meant it was recognised by consumers.

“When we are putting money into attracting consumers to it and advertising with it, the retailers are seeing a benefit and wanting it on.

“That’s a good news story — we think that this is a great logo.”

Rebranded and redesigned Woolmark logos are being used in all of AWI’s major marketing campaigns such as No Finer Feeling, Cool Wool, the International Woolmark Prize, Woolmark Gold and Campaign Wool.