Woolly jumpers selling out as Fibre of Football kicks goals 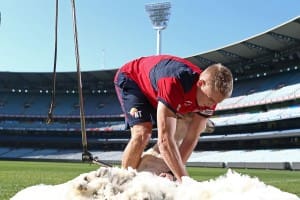 Woollen AFL jumpers are selling out as Australian Wool Innovation’s Fibre of Football kicks into gear in Victoria.

With sheep being shorn on the MCG and children meeting Sam the ram before the game, AWI media manager Marius Cuming reported today there was “a six-week wait” period for loyal fans wanting a woollen AFL jumper.

Mr Cuming said Australian football and Australia’s natural fibre continue to celebrate their deep and ongoing connection through the Fibre of Football campaign.

The wool industry has showcased itself to the Australian football public through a series of events, woollen products and new videos that help tell the many stories of the campaign.

Headlining the campaign is Fremantle superstar Nat Fyfe who took supporters back to his home town of Lake Grace in WA in a new video to explain his relationship with the wool industry through his family’s transport business. The video has had 300,000 views since it was played on Channel 7 as part of the campaign to expose Fibre of Football to major metropolitan media outlets in the past week. The top-rating Melbourne 3AW breakfast program launched the woollen jumpers last Friday.

“We had a great day yesterday at the MCG, it has been on Fox Footy and Channel 9, it has been pretty much everywhere,” Mr Cuming said.

“The Fibre of Football campaign has had overwhelming support from metropolitan media and the general public.”

A video of Geelong premiership star Tom Hawkins was released recently which gives a unique look at his country background on a mixed sheep, beef and cropping property at Finley, NSW.

Bernie shears one for the wool team

Melbourne midfielder Bernie Vince showed his shearing skills on the MCG in front of the football media. As the son of a shearer and woolgrower from the Yorke Peninsula in South Australia, Bernie was possibly the first person to shear a sheep on “the paddock that grew” for up to 200 years.

Mr Cuming said the Fibre of Football campaign now has a new advocate – Luke Breust from Hawthorn – hailing from a woolgrowing property at Temora.

“And this week at AFL House entrance there are three wool bales – one of them has Springfield written on it and the number 26, one has Pine Hill and number 22 and one has Tycovale and number 25.

Over the past week, celebrity Merino rams Fred and Truffle have been meeting people on their way to work, shopping or at the football. Appearing across at the MCG, and across the city, the rams have also made guest appearances on the Fox Footy channel and at Melbourne’s top-rating breakfast program on 3AW with Ross and John.

The woollen range of supporter jumpers, scarves, beanies, gloves and knitting kits has also been launched. Available through all AFL club websites and AFL shops, the woollen products using 100 percent Merino wool are proving particularly popular for supporters keen to keep warm and comfortable at the football.

The wool in the jumpers has been traced back to 25 farms across Australia. These woolgrowers will be receiving the relevant team jumper and growers such as Penny and Francis Barry (Vic), David Cooper (NSW) and the King family (WA) have featured in videos to help tell their story.

An overview of the entire Fibre of Football campaign, including videos and background information can be found at the newly launched dedicated website www.fibreoffootball.com.au.