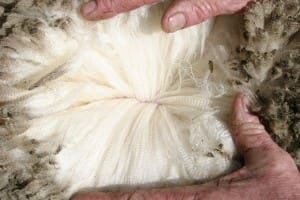 Traditional wool industry sparring partners say they are putting aside their differences and engaging more closely than they have in years over shared concerns about the level of influence wool growers have over how their levies are invested.

WoolProducers Australia and the Australian Wool Growers Association (AWGA) are often on opposing sides of wool industry debates, but both groups say they are working closely in a bid to achieve a more unified voice for woolgrowers.

WoolProducers president Richard Halliday said the move was a first step towards opening the channels of communication between the various groups that represent wool producers, with a view to hopefully allowing all groups to speak as one on important issues.

The improved communication between the groups has in turn led to deeper discussions around issues such as the capacity woolgrowers have to influence how their compulsory wool levy funds are spent.

That woolgrower attentions are again focused on levy issues is hardly surprising given unfolding events in the industry.

A Senate Inquiry is currently delving into levy arrangements in all agricultural industries, including the 2pc levy wool producers pay on their gross wool proceeds each year to Australian Wool Innovation (AWI) to fund industry marketing and research and development programs.

The next triennial WoolPoll vote is also due later this year, which gives woolgrowers the opportunity to vote on the percentage of levy they pay to AWI for the next three years.

Voting options are yet to be confirmed for this year, but in previous WoolPolls growers have typically been given the choice of voting for a levy of 3pc of gross wool proceeds per year to 2.5pc, 2pc, 1pc or 0pc. A 0pc vote effectively means levy flows to AWI for marketing and R&D stop completely.

These important events are also set against a backdrop of subdued farm gate prices, which usually a trigger for growers in any industry to look more closely at how those spending their levies are performing.

Do wool growers have enough influence over levies?

In comments to the recent senate inquiry, grower groups expressed concern about the level of say growers have over how AWI spends their levy funds.

WoolProducers told the inquiry that consultative arrangements between woolgrowers and AWI should be strengthened via a similar formalised relationship that is used in other industries to ensure growers maintain full control and oversight over how their levies are spent.

In the red meat sector, the levy-funded grower service organisation, Meat & Livestock Australia, is required under a Memorandum of Understanding (MoU) to work with a “prescribed industry body” in each red meat industry to determine how it spends grower levies for that sector.

The MoU also gives each prescribed industry body the authority to approve MLA’s annual operating plan and budget for their particular sector each year.

In the wool industry, however, no specific or individual woolgrower body has the same enshrined authority over AWI.

AWI’s Statutory Funding Agreement with the Federal Government requires it to meet with ‘wool grower industry representative bodies’ every six months to review industry priorities for research and development and marketing investments.

Four years ago, after an independent performance review identified that AWI’s processes for consulting with growers were lacking, AWI established an Industry Consultative Committee (ICC) to improve its consultation with woolgrowers.

So is the ICC process working? Does it give woolgrowers adequate say over how AWI spends their levies?

AWI told a recent Senate Inquiry public hearing that it meets with the ICC for a full day every three to four months (more often than the six month time-frame its Statutory Funding Agreement requires).

Wool leaders have told Sheep Central that the ICC can make recommendations to AWI on how levies are spent, but ultimately the authority to make decisions on what is funded and what is not rests solely with the AWI board.

ICC concept has not worked in practice: Olsson

AWGA spokesperson and former AWI board member Chick Olsson was a member of the AWI board when the ICC was developed, and said the idea at the time was right.

The committee was established, he said, to be a “two way street”, with meetings intended to be as much about grower representatives on the ICC telling AWI how they wanted money spent, as it was about AWI updating growers about how it is spending their money.

However, four years on, Mr Olsson says the ICC has not functioned that way in practice.

In his view the board is acting as a “monopoly” and uses the ICC as a “rubber stamping” exercise to allow AWI to satisfy the Government’s requirement that it consults with industry so it can continue to receive $12 million per year in matching Government R&D funding.

“You have a board that is operating completely, solely by itself,” Mr Olsson said.

Mr Olsson said an example of AWI not following the clear wishes of growers was its decision not to continue funding for Bredwell Fedwell program (which is still funded by MLA in the sheepmeat industry). The program was an “immensely popular” research program among growers, Mr Olsson said, but was not refunded by AWI due to “perceived conflict of interests with some people at AWI”.

Another example of AWI overstepping its chartered authority, Mr Olsson said, was its recent initiation of discussions with the Federal Government about increasing the WoolPoll vote time frame from three years to every four or five years, without being directed to do so by grower representative groups. This was beyond AWI’s remittance as a grower funded service organisation, he said.

“I think you will find that we’re all about to bail up on it (AWI’s consultation process through the ICC), and say it is just ridiculous, everyone is wasting their time travelling down for two days to sit there and be lectured by AWI staff on what they want to do.

“Until the ICC is given some authority to say to be the final stamping body, it is just going to continue to be governed by a board of people rather than an industry.”

“They (AWI) will say they go and do roadshows, but it is not a consultative process, it is telling people what they are doing.”

WoolProducers president Richard Halliday was more circumspect in his assessment of AWI’s commitment to consultation.

He said a more formal relationship between AWI and woolgrower representatives was needed.

One of the concerns WoolProducers has with AWI’s consultation processes surrounds what it sees as a lack of measurement or reporting by AWI of the grower feedback it receives.

There is no evidence, WoolProducers says, of minutes of ICC meetings being distributed, or records of actions and resolutions that were taken at the meetings or other AWI consultation sessions with growers.

Mr Halliday said the single ICC meeting he has attended since becoming WoolProducers president was more about AWI informing growers about what it was doing with their funds, rather than growers telling AWI how funds should be spent.

Changes were needed to ensure AWI provided effective consultation and growers had more influence over how levies were used, he said.

However, he said it was also up to the woolgrower groups to speak with one voice to ensure the ICC process has more power, Mr Halliday said.

“That is starting to happen,” he said.

“Our first step has been getting us all in the one room so we can talk effectively as a unified wool industry before we go any further.

“That is a big step, and we have talked enough with each other to see that we are all saying the same things – we’re not getting conflicting thoughts at all.”

An AWI spokesperson told Sheep Central that the AWI Industry Consultative Committee (ICC) was set up to give wool representative industry leaders a first hand account of activity at their R&D and marketing body to then communicate to their woolgrower members.

“The ICC members all have direct input into the agenda from one meeting to the next and are free to discuss matters on the day,” the AWI spokesperson said.

“Issues such as wild dog control, the wool selling system review, Lifetime Ewe Management and increased shearer training are all examples of woolgrower concerns that have led directly to increased investment.

“Unfortunately the communication from ICC members back to woolgrowers has been significantly lacking but for those who wish to speak with their directly elected Board members and senior staff there are well over 50 industry events held across the country and across the year to engage directly.”

The elected AWI board provided grower oversight over how levies are spent by AWI:

I just want to try and address some of these issues about some of these people who purport to represent our shareholders and want to try and run the business. I cannot be much plainer than that. We are a board. We are responsible directly to the shareholding. We have a system where we consult with these various groups. If you see the structure of the ICC, there is more than one. If you want oversight by these groups to such a level that was asked about this morning, then why do you have a board?

AWI’s submission to the inquiry, and comments by AWI staff to the public hearings, outlined the various ways in which the organisation consults with growers in addition to the ICC.

This included biannual Woolgrower Forums, quarterly briefings offered to State Farm Organisations, and numerous meetings each year with woolgrowers in country halls across Australia attended by members of AWI senior management and its board.

AWI also points out that it is also directly accountable to woolgrowers through the three-yearly Woolpoll process.

Prior to every WoolPoll, AWI is required to have an independent audit conducted of its performance, the results of which are distributed to growers prior to each WoolPoll vote.

In response to Senator questions about the capacity that exists for levy payers to influence how AWI spends their funds, AWI provided the following information: