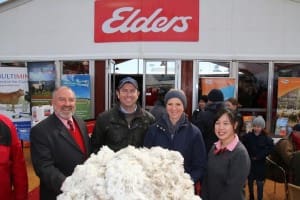 WOOL is the priority in the Thurles Partnership’s Melville Forest operation, but an infusion of new Merino genetics is aimed at improving the fertility and meat-producing traits in their commercial flock.

The Brody family partnership was last week presented with the Elders’ Supreme Southern Clip of the Year award for 2014-15 at Hamilton’s Sheepvention by southern zone general manager Malcolm Hunt.

The partnership of Jim and Dianne Brody, their son Tim and daughter-in-law Carla, had won previous monthly clip awards, but the overall award for the region was its first. Elders showfloor manager Mal Nicholls said the Brodys won the April 2015 monthly award with an excellent style clip, well-prepared by classer Emma Vaughan, with an accurate and precise speci sheet.

In winning the overall award, Mr Nicholls said the clip scored exceptionally well in all categories and the well-prepared clip was a worthy winner.

Tim Brody said the operation ran about 9500 Merinos, 30 percent of which are wethers. The Brodys breed their own rams, with various infusions of Nerstane and Roseville Park. More recently they joined Bundilla rams to try to lift the flock’s fertility and early growth performance for better lamb growth.

“They will be easier to look after too hopefully,” Tim said.

The flock has been run on Lifetime Ewe Management principles for about five years and there was an initial marginal lift in fertility, but this depended on the season. Flock lamb marking percentages fluctuate from the mid-70s to the mid-80s, Tim said.

He said selection within the flock was aimed at wool cut, diameter and fertility.

“I don’t want to go any finer than where we are, but increase the cut, fertility and lamb growth rates.

“We’ve always used figures – we have fleece weighed and micron tested for years and more recently we have put worm egg counts into it.”

The flock generally averages about 5.5kg of 17.5 at a stocking rate of 13-14 dry sheep equivalents per hectare. 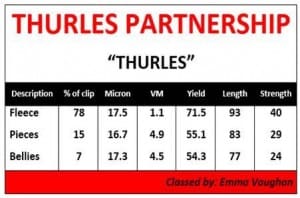 Tim said the winning clip was the first that Emma Vaughan had classed as part of contractor Barry Clarke’s team after working as a wool handler.

“She did a great job, she is very particular.

“And it was a particularly good growing year last year,” he said.

“The wool yielded very well, which is a bit unusual for this sort of country.”

Tim said the sheep did well in the winter last year, then the spring cut off, but because the scarce feed was of very good quality, there wasn’t much old feed left and levels of seed and dust in the wool were low. The season also improved the clips tensile strength with several lines above 40 Newtons/kilotex, he said. The winning clip was shorn in March this year.