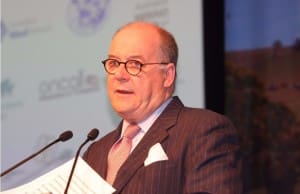 Wool industry stakeholders from across the world meeting in Sydney for the International Wool Textile Organisation annual congress this week have been given an upbeat assessment of wool retail markets.

IWTO president Peter Ackroyd said he was reminded by exporter Ian Laycock that the congress, in the Four Season Seasons Hotel at Circular Quay, was being held only a few hundred metres from where the first clippers sailed to Liverpool, London, Bremerhaven, Marseilles and Genoa laden with wool.

“They were laden with Australian Merino that went to my home city of Bradford in west Yorkshire where my grandmother used to tell me that 70,000 people worked in the worsted industry processing Australia Merino.”

“It was a massive industry and it brought prosperity,” he said.

He said the mood of the world retail markets in fashion, interiors and lifestyle is currently “rather positive”.

“Since the global financial crisis wool and an environmental appreciation of what one buys has become more and more important, and this will continue because sustainability, and all the problems around it and all the definitions of it, is here to stay,” he said.

“I sometimes get angry, annoyed at certain people who are claiming that they have more environmental knowledge and rights that we do in the wool industry.

“We are superbly self-regulating, we come from countries that care passionately about animals,” Mr Ackroyd said.

“They say that in the UK an animal is better taken care of than a public school boy – you’re speaking to one here.

Mr Ackroyd said the IWTO would launch its sheep welfare guidelines in September at Dumfries House.

“We’ll be greeting many of you there in September to where we want to make I call the Dumfries House declaration which will be a very robust form of our sheep welfare guidelines, saying that these people – retailers, spinners weavers, topmakers, wool merchants wool growers will be committing themselves to environmental excellence, animal welfare and the good of wool.”

He thanked Federation of Australian Wool Organisations president Robert Ryan and his team for the record attendance and speaker lineup at the 2016 IWTO Congress.

“I’m also very pleased that you have emphasised the young and the future generations.”

He said there are more than 20 young professionals at the congress who want to learn about wool, how wool works, from the farm to consumer.

“This is the ideal forum in which to do it.”

Mr Ryan told the 480 delegates and partners from 23 countries that FAWO was in its 50th year of IWTO membership.

“It is truly a great organisation that represents the Australian wool industry.”