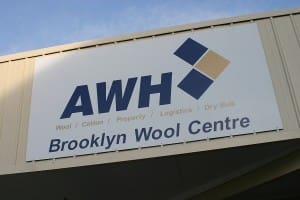 Wool prices have surged by around 15 cents to make their largest weekly gain in a month, AWEX said today.

After sales in Melbourne, Sydney and Fremantle, the AWEX Eastern Market Indicator finished the week up 15 cents on 1038 cents, with the EMI in US$ at 914 cents, and the Australian dollar on US88.05 cents.

“Wednesday made way for Australian-sourced wool which had encouraging increases for most descriptions.

“Both Sydney and the one-day Fremantle sale were the most successful, rising by 10 cents clean,” he said.

On Thursday prices increased a further 10-15 cents and odd pockets of 20 to 25 cent gains were seen in Melbourne, he said.

“Low mid-break types continued to find good support during the sale, including some of the lower strength types which buyers are increasingly seeking.

“Whilst best style and low-vegetable matter types are appearing in larger numbers and improving the overall quality of the offering, volumes remain tight for the low mid-break types, Mr Plunkett said.

“Only 35.9 percent of the adult Merino Fleece wool offering this week had a measured mid-break (POB-mid) less than 50.”

Mr Plunkett said volumes for the low mid-break types have been trending lower since July and this week was the lowest level since January 2010.

Merino skirtings initially had varied results before renewed support on Thursday pushed them to be 10-20 cents higher than last week, he said.

“Crossbreds furthered their recent gains with rises of 10 to 15 cents.

Merino cardings firmed a few cents in all three regions.

Market expected to be solid in coming weeks

Fox and Lillie Rural technical and marketing manager Eamon Timms said there was a reasonable amount of trading business done – selling wool for shipment in coming weeks — at the end of last week.

“So people had commitments, everyone has commitments to cover so they are all getting pretty involved in the market.”

Mr Timms said most of the demand was China-based.

“But obviously the European are getting a bit more active on the finer better spec wools.”

It was too soon to call the market lift part of a sustained recovery, but Mr Timms was expecting the market to be “pretty solid” over the next couple of weeks.

“No-one is really selling much wool for distant shipment – 6-8 weeks out – everything is being done fairly prompt.

“I think the immediate next few weeks looks like it is going to be solid enough, but whether it continues after that remains to be seen.”

Mr Timms said if the Australian dollar kept dropping against the US dollar that would help the market.

“But if it drops sharply that will make them sit back and wait.

“So if it is a steady decline, that’s fantastic, but if it is a sharp drop, that will just put doubts in people’s minds about how long they should sit out.”

Landmark wool risk manager Anthony Boatman said fine through to medium wool in Sydney enjoyed solid support in opening sales on Wednesday with gains of 10-15 cents common across the board. “High mid‐breaks were discounted, while good premiums were applied to the lots with low mid‐break percentages.

“Crossbreds were mixed, with 26 and 28 microns lifting 5-10 cents, while the 30 micron categories were off around 5 cents.”

Further increases were recorded on Thursday as most fine through to medium merino fleece wools sold 10-15 cents higher. The lower volumes of 22 micron wool recorded the largest gains of over 20 cents, he said. Crossbreds also continued to perform well, with gains of 5-10 cents and oddments lifted 5 cents.

Strong competition for crossbreds in Melbourne

Prices for 17.5 micron and finer wool were softer in Melbourne’s opening sales on Wednesday, however the majority of wool on offer of 19-22 micron found good support, and recorded gains in the order of 5-10 cents, he said.

“The crossbred selection enjoyed strong competition, particularly the 25 and 26 micron wools, which gained up to 20 cents, while the coarser wools lifted around 10 cents higher,” Mr Boatman said.

Thursday’s sale opened well in Melbourne and values across most categories continued to improve as the sale progressed.

“The 18.5 to 19 micron wool found solid support, lifting 20-30 cents, while most other fine through to broad wool posted gains of between 5-15 cents.

“The 25 and 26 micron categories also performed well with gains of 10 cents or more, while coarser crossbreds sold firmer,” he said.

Mr Boatman said Fremantle sold only on Wednesday this week, with good support across all categories pushing the 18-22 micron indicators up 10 cents.

“The 20 micron wools recorded the largest increase of 15 cents.

Mr Boatman said the Australian dollar has been trading at nine-month lows this week, dropping under US87 cents during Wednesday.

“In USD terms the EMI dropped to 894 cents, then picked up 20 cents on Thursday with the increase in the exchange rate to close at 914 cents.

“The EMI (in USD) remains in a downward trading channel, which started June 2011.”