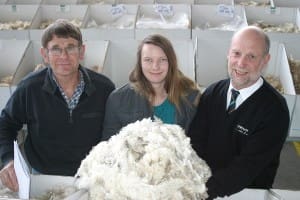 Wool prices bounced back this week as a large Chinese wool order put other exporters and traders on their toes.

The indent buyer Kathaytex re-entered the market buying 194 bales in Sydney and 300 bales in Melbourne on Wednesday and then another 497 bales in the north and 324 at Brooklyn on Thursday for a Chinese mill.

The order encompassed four different types between 17.5-21 micron, up to four percent vegetable matter (average one pc), in lengths from 62-110 millimetres and varying tensile strengths — from 15 Newtons/kilotex up.

Landmark market analyst Anthony Boatman said the market recorded good results across most micron categories over both days of sale.

“The Eastern Market Indicator was quoted nine cents higher after Wednesday’s sale, then climbed another 14 cents on Thursday to close the week on 1025 cents.”

It was the largest weekly rise in the AWEX-EMI in five months, AWEX said.

Kathaytex order in Sydney and Melbourne has impact

Kathaytex buyer Brad Hillier said the company had been buying predominantly out of Melbourne and rarely out of Sydney, but the 500-odd bale purchase when there were less than 3000 bales of fleece available in Sydney on Thursday was certainly a factor in the market’s lift. The low Australian-US dollar exchange rate on Wednesday night – 93.43 cents – also had an impact, he said.

“In such a short supply situation, 500 bales has a significant impact on the market.”

“Solid gains continued for medium microns into Thursday with prices quoted 25-35 cents higher for the 19-21 micron categories,” he said.

“The gap between better style and strength lots and the lower spec wools was diminished as better types remained firm, while the lower spec lots lifted up to 30 cents.”

Crossbred wool were quoted firm to unchanged in Sydney.

“Prices improved throughout the sale, closing on their high point for the day, which carried through into Thursday.

“The greatest improvements were seen amongst the 18-22 micron categories with gains of 15-20 cents and up to 27 cents for the 18.5 micron wools,” Mr Boatman said.

Crossbred fleece also lifted, with gains of 5-10 cents recorded across most categories, he said.

On Thursday in Melbourne, the 19-23 micron categories were quoted up 20-30 cents on the back of good buyer competition.

Fremantle sales also opened well with the 18 through to 22 micron categories quoted 10-20 cents higher at the close of trade, Mr Boatman said.

The highest gains of around 20 cents were made at the 22 micron and at the finer end, among the 18 micron categories.

“Most other categories were 10-15 cents dearer.

“Gains of 25-30 cents across the board on Thursday saw levels for the 19 micron and broader wools on offer climb closer to par with their east coast equivalents,” he said.

Oddments performed well in all three centres on Wednesday. Locks were 10-15 cents higher, with most other categories also selling firmer. Prices were relatively flat however during Thursday and handed back most of the Wednesday gains in the west, Mr Boatman said.