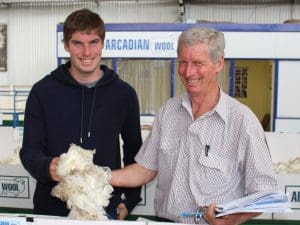 AWEX said its Micron Price Guide for 19.5 micron wool has been the stand-out performer recently and is now sitting at a record high. However, wools across the entire Merino spectrum attracted excellent competition from all sectors of the trade, pushing prices strongly into positive territory.

The 16.5 to 21 micron wool recorded general rises of between 30 and 80 cents, with inferior types and better style wools, with unfavourable length and strength results, enjoying similar rises in price. The headline indicator hit a new high, surpassing.

AWEX said the skirting market had a similar result to the fleece with sharp price rises on the back of strong widespread competition. All types and descriptions experienced general rises of between 50 and 100 cents, with wools finer than 18 micron and less than 2 percent vegetable matter enjoying the largest gains.

The crossbred market finally managed to reverse the downward trend it has recently been suffering, AWEX said. A more stylish selection than in recent offerings attracted robust competition, but the entire crossbred range recorded general rises of 20 to 40 cents. The better prepared lines attracted the most interest.

AWEX said the oddment sector came under intense pressure this week, as buyers fought hard over a limited supply. All carding types generally rose by 30 to 50 cents, but it was the lambs that attracted the most buyer attention. Micron was the focus and many finer lambs recorded extreme price rises, regardless of length.

“It was just very solid.”

His client Neil Rizzoli with his son Andrew from Rokewood sold 237 bales of fine Merino wool on Wednesday, up to a top price of 1620c/kg for 17.4 micron weaner wool.

“It was an unbelievable sale,” Mr Rizzoli said.

“We were exceptionally please and couldn’t be any happier.

“It is good to see that the table has turned.”

Mr Rizzoli said although his clip was probably a micron broader due to the season, some lines sold up to 150c/kg above valuation.

“It was one of those years when you had good wool and the price was right.”

The Australian Wool Innovation weekly market report said the EMI’s level in $A is a staggering 320ac or nearly 25pc higher than at the same time last season.

“Similarly this week’s US35c/kg clean rise in the US EMI to a closing level of US1252c/clean kg sees that indicator also 25pc higher or US255 cents above last season.

“Since AWEX assumed the market reporting duties in the mid 1990’s, only once before has the $A EMI sat over 1600 cents, and that was in mid-August earlier in this season.”

“The largest top maker outside of China dominated the highest quality Merino fleece of 19 to 22 micron brackets.

“This same operator also targeted the best of the brokens and pieces types in the skirtings market as well as stepping into the finer end of the crossbred sector, making up for a very impressive purchase of well over 4000 bales or 10pc of the national offering for the week.”

AWI said European interest also featured in other wool description sectors on the final day, as the Italian operators lifted their buying intensity in the better super fine (finer than 18.5 micron) Merino fleece types after missing out on the first day. Some individual lots were as much as 130c/kg dearer for the final day of selling.

“While the Europeans ambushed the market at the better end, Chinese interests were just as keen and one of the top two top makers in that country almost replicated the buying numbers of their European competition,” AWI said.

“To see the first stage manufacturers battling in the sale rooms is quite something.

“The strength of competition would seem to validate their belief in the current demand for the product they are continually investing so heavily in.”

AWI said while forward sellers bit the bullet as well and participated in purchasing selectively, it was left to the indent operators to provide the bulk of the competition away from the top makers.

“Reports flowed through of Chinese factories and traders unable to get set for forward contracts, so spot buying through indent operators was seemingly their course of action.”

Endeavour Wool principal Josh Lamb said demand for wool was now outstripping supply, although November was typically the month when business from China starts to “get a bit deeper”. He believed Chinese and European mills were trying to improve their stock positions.

“There is genuine concern around the world about supply.”

Mr Lamb believed the current Merino prices levels were here to stay, but was less confident about the crossbred prices being maintained. He said the crossbred offering was starting to improve, in length, yield and preparation, with more growers starting to skirt their clips again.

Next week quantities slightly reduce, currently just under 43,000 bales are on offer in Sydney, Melbourne and Fremantle.