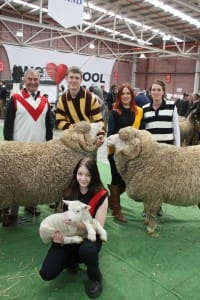 The first goal was kicked in the wool industry’s new Fibre of Football campaign at its launch at the world’s biggest sheep event, the Australian Sheep and Wool Show in Bendigo today.

Australian Wool Innovation launched the program to celebrate before a crowd of growers, stud breeders and industry leaders to celebrate the rich heritage connecting the wool industry and Australian football.

AWI has also partnered with The Football Almanac to collect imagery and stories of woollen football jumpers along with nominations for the Ultimate Wool Team for those who have contributed significantly to wool and football.

Ultimate Wool Team nominations can be made online at the Football Almanac.

AWI has also released an introductory video to celebrate the connection between the wool-growing community and football.

Those already nominated for the Ultimate Wool Team include wool classer Anthony Daniher (Sydney and Essendon), indigenous shearers Phil and Jim Krakouer (North Melbourne) and Merino stud master Ross Ditchburn (Carlton). AWI believes there are countless wool industry men and women who have been crucial to their local football club both on and off the field.

AWI said the Fibre of Football campaign would celebrate two Australian icons that have supported each other throughout the evolution of our native game and our natural fibre.

Wool classer and football fanatic Darren “Strop” Strawford from Dunkeld in Victoria said the footy club is the “life blood” of country towns.

“We all gather together on a Saturday and we come and watch the football. “The wool industry and football are intertwined and they are the most important things going on around here.”