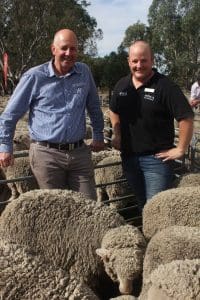 WESTERN Victorian wool and sheep meat producers have been urged to innovate to reclaim “acres” from competing commodities and to take some responsibility to adopt new technology and practices on farm.

At the recent Elders Balmoral Sire Evaluation Field Day at Harrow, Mecardo managing director Rob Herrmann said the decline in Merino sheep numbers must be stopped and the industry must innovate to make it exciting to young farmers and take back “acres” from grain and other commodities.

Something has to change to introduce innovation into the wool industry, otherwise “someone else is going to take over,” he said.

“So who should take responsibility for this?”

Mr Herrmann said there had never been a better time to engage with innovation.

“The time to do it is when things are good and this as good as we’ve seen it for a long time.”

Mr Herrmann said a grower selling a 19.4 micron line of fleece wool last week would have paid $21 a bale to test it, about $30/bale to sell it, and about $50/bale in wool levies.

“Se we’ve now got funds, significant funds, as good as it is going to get in my view in terms of funding, to do something, and it’s your money.

“So if you were spending that amount of money on your local adviser, you would be asking questions and I suggest that’s what we should be doing now, not waiting until things go pear-shaped on the farm and the bank manager is knocking on the door, but while things are good,” he said.

Farmers must take responsibility to change

Achieve AG Solutions consultant Nathan Scott said the issue of farmers not wanting to change was something he was faced with all the time.

“People say to me farmers won’t change – how does that make you feel?

“That’s what you are told all the time – farmers won’t change,” he said.

“One of the challenges for us as an industry is – it doesn’t matter what Australian Wool Innovation or anyone else does, they can go and trumpet their best possible technology – if no-one adopts it, it’s useless, a waste of money.”

Mr Scott said a lot of the responsibility for innovation rested with producers, rather than with funding bodies and research organisations.

“Because I know there is some bloody good work that has been done that very few people have adopted.

“So we have got to take some responsibility for that.”

Mr Scott said the sheep industry was built on producers doing the same thing repeatedly, but expecting a different result.

“We can’t keep going down that path.”

Mr Scott said electronic tags alone did not make producers money, but by matching individual animal measurements or data to EID tag numbers, producers can find their flock’s poor performers and the highest producing ewes per kg of lamb weaned per hectare.

“Imagine a dairy farmer milking morning and night and paying no attention to how much milk went into the vat – would they do it? No chance.

“How many can put your hand on your heart and tell me what your average lamb growth rate was last year?” he said.

“You can’t improve what you don’t measure – if we are serious at being better at what we do and we want to attract more people, we have to start measuring,” he said.

Mr Scott said consultants and AWI could put many innovations in front of producers.

“But it is not the tools that make anyone any money or any happier – it’s you.

“Whatever you do well today, you can do better tomorrow.”

Wool has been losing the as against other commodities

In his presentation ‘Make Merino great again’ Mr Herrmann said these were unprecedented times with wool prices at fantastic levels and wool production per sheep and per acre moving ahead. Spikes in fine wool prices weren’t helping, but buyers buying in $US were comfortable and there was good demand for wool.

“There is no push-back on price right now.”

But at the risk of being “the grinch”, Mr Herrmann pointed out some challenges, advising growers to watch the premiums for fine wool and their effect on production. Mr Herrmann said the industry had lost about 700,000 bales of Merino wool in the last 10 years.

“We have been losing the war.”

Mr Herrmann said wool operation benchmark results aren’t the reason for the decline in Merino wool production; it has been competitive with other enterprises.

“In fact, the evidence that comes out of benchmarking in western Victoria is not which enterprise you are in, it is how well you actually do it.”

Mr Herrmann said beef with prices doubling in the last 2.5 years and prime lamb prices were increasing consistently each year – “the highs are higher and the lows are higher” — with strong demand.

“In fact, in the last 20 years the number of lambs slaughtered in Australia has grown by 64 percent.”

Grain prices were “not a great story”, with no good news and oversupply worldwide, he said. However, Mr Herrmann said as sheep numbers have fallen in Australia, the acreage sown to crops increased, with cropping seen as exciting because of the machinery and technology involved.

“But grain wouldn’t be seen as exciting if you had to do things the way that they were always done (ie load grain in bags by hand).

“The grain industry is innovative and changed itself.”

Innovation agriculture had happened in other areas – no spud forks or little hay bales – but Mr Herrmann said the example of the unchanging design of the wool bale highlighted the challenge that “we as an industry haven’t really changed as much as our competitors.”

Merino flock decline must be halted

Mr Herrmann said the decline in Merino sheep numbers must be stopped.

“If we can’t do it now when we are in this sort of profitability, then we are in big trouble when the market eventually turns, and it will turn, we know that.

“We must win some acres back, we have to become winners,” he said.

“A successful vibrant industry will take acres back.”

Mr Herrmann said he wanted to see the next generation of wool growers excited about being in the industry.

“And I want to see investors come in …. we have to get out and tell them that this is a great story; that there is a lot of money to be made, that we don’t have a lot of risks like we do in grain, for instance.”

“So how do we do it? We must innovate.

“Where’s the breakthrough in wool handling – the new big idea?”

“I compliment them not because someone is trying to do something.

“If we don’t want to change, then the other industries that are changing and innovating are going to take us over.

“If we innovate we will win back acres, there is no doubt about that.”

The industry had to be investor-ready, with plans for marketing, OH&S, succession planning and constant improvement with financials that prompt participation.

He said the industry must innovate – continue to look for new ideas and new innovations – and it could not afford to lose another 700,000 bales.