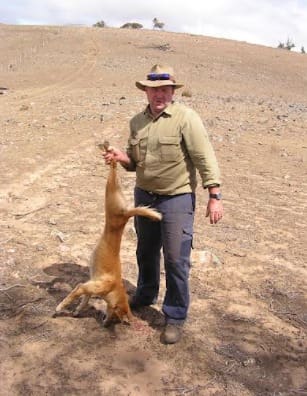 Robert Ingram with a wild dog.

VICTORIA’S parks should be fenced with exclusion fencing if dingoes were introduced, according to an eastern Victorian wool grower and wild dog management group co-ordinator.

Victoria Valley farmers opposing the proposed introduction of dingoes into the state have organised a public meeting in Dunkeld tonight to lift awareness.

The wool-growing Crawford family at ‘Rock-Bank’ will hold the ‘No Dingoes’ public meeting from 7pm tonight in the Dunkeld Community Centre, 14 Sterling St., Dunkeld.

“If they want protect dingoes and agricultural production in Australia and the welfare of animals, the tax payer has to pay to fence them in.

“If they want to protect their food sustainability, quality food production, then there has to be a line drawn in the sand,” he said.

“You either control them or you fence them in.

Mr Ingram said despite a three-fold increase in wild dog control measures in the management group’s area over the last four years, the problem has worsened, with attacks occurring in areas not previously affected. More producers are erecting exclusion fencing.

“You can stop the national parks from being a breeding ground for canine and feline predators – dogs, cats and foxes — in two ways.

“You can either control them with a multi-faceted control program using extensive, intensive and frequent baiting, or you fence them into the national parks,” he said.

These control measures have a major impact on populations of koalas and small ground-welling marsupials and a huge impact on ground-dwelling birds, and reptiles and amphibians.

“This should not be focussed on dogs, it’s about controlling the apex feline and canine predators that are adversely, pejoratively, negatively impacting on those species,” he said.

“If the society thinks that this apex predator (the dingo) is so important and if they want to us to continue to produce high quality food and fibre, have our agricultural system sustainable and allow our land managers to properly manage, then you fence in the national parks.

“But then we must have the capacity to run multi-faceted control programs outside and get research backing to find an antidote for 1080.”