The spot auction closed under pressure this week, with the volatility that has dogged the market all year continuing to have an impact. The market gave back the gains of last week as the perceived pressure of 50,000 bales on offer, the logistic limitations of the Christmas break and the stronger Australian dollar weighed down prices.

Exporters were happy to manage some margin 20 cents under last week’s cash levels, even with the index closing for the year at 1391 cents, down 57 cents. Security of price going into the early auctions of 2021 is considered as important.

We closed a year like no other with the key 21-micron indicator having moved over 30 cents on 41 of the 94 sale days for the year (44 percent). As the graph below indicates, the last three years have been the most volatile of the last 25 years, as the long-term upward cycle completed and the pandemic and subsequent demand shock extenuated the down trend.

Trying to predict the direction of the market post-Christmas is fraught with danger. Historically, the January market is dearer. Nine of the last ten years have been firm or dearer. This year with a return to auctions on the 12th of January and an early Lunar New Year, coupled by third wave lockdowns, we may have to show patience before we see a demand driven revival.

In the meantime, we wish all a happy, holy and safe Christmas and New Year. 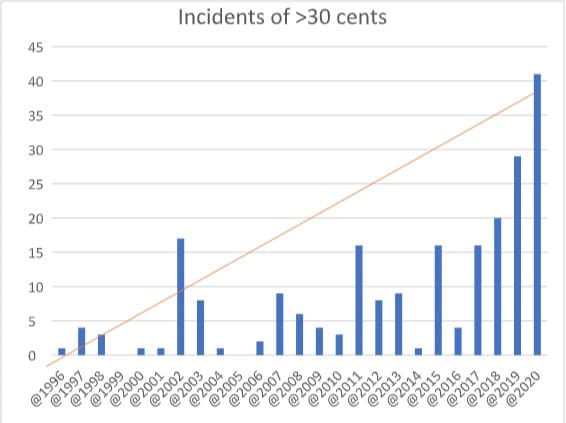