GROWERS focused their forward hedging on fine wools as auction  prices closed on a steady note, with the major movement between microns.

Superfine wools lost ground, which is unsurprising when the gains of June are taken into account.

Although, as shown in the table below, all qualities closed off their highs, they; however, they did finish above their averages for the season.

Gains were particularly strong at the finer end and drop as you move across the microns. This has been borne out not only in the forward trades, but also in the levels being offered into the spring and New Year.

The forward bids and offers reflect the opinion that we will see the difference in the basis between the microns close. Growers are focusing their hedge activities at the finer end and are offering up to a 5pc discount to spot to attract buyers.

Exporters on the other hand are bidding flat to cash or premiums and focusing on the broader microns. The logic behind these strategies is illustrated acutely in the chart chart. The premium for 17 micron over 21 micron peaked at the end of June at 1266 cents, near its decade high of 1300 cents and three times its average of 400 cents. The same story plays out across the other microns to varying degrees.

These movements will bring both challenges and opportunities to those looking to mitigate forward risk into the spring and beyond.

Interest on forward markets has lifted a little in the past week, but participation is still stubbornly stuck around 1pc of the underlying clip; well below what is optimum to give consistent and meaningful market signals to the supply chain. 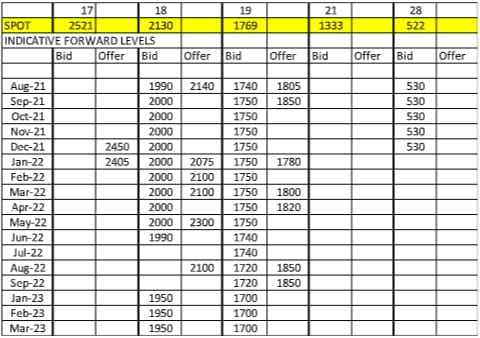