Wool growers back AWI with 2pc levy for another three years 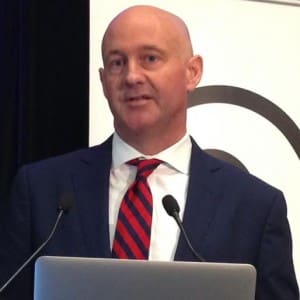 AUSTRALIA’S wool growers have voted to continue to pay a 2 percent levy to fund research, development, extension and marketing programs domestically and around the world.

This compared with the 60.34pc of votes for the 2pc+ options in the previous WoolPoll in 2012.

As in previous polls, eligible levy payers were invited to select their preferred levy option from 0, 1pc, 2pc, 2.5pc and 3pc. 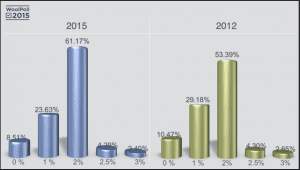 Mr McCullough said every Australian state favoured the 2pc levy option and voter participation was consistent with the longterm trend.

After the WoolPoll 2015 result was announced, Mr McCullough said WoolPoll isn’t “won” in the last three weeks of the poll.

“I went into this WoolPoll quite confident that we had performed well enough in the last three years,” he said.

However, Mr McCullough said he was relieved that he could see “some light at the end of the tunnel” after the last six months in which AWI has had the poll and national roadshows, a review of performance, audits, directors’ elections, the Wool Selling Systems Review and the annual general meeting.

“We literally take a little breath now, we move into next year, we write a new strategic plan and renegotiate the statutory funding agreement.” 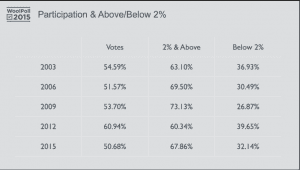 Mr McCullough thanked woolgrowers for participating and showing faith in AWI to continue its work to increase the profitability of growing wool.

“We take the responsibility of investing growers’ levies very seriously, so we are heartened the level of support for the 2pc levy rate increased this year.

“WoolPoll is a transparent and fair way for woolgrowers to decide our future funding and the opportunity to vote zero is an option the AWI Board is pleased must always be offered.”

At annual general meeting, Mr McCullough reported on the research, development and marketing results for the company. These included efforts to lift demand for Australian wool through ongoing marketing initiatives and new fabric innovations, wild dog control funding and increasing productivity through programs such as Lifetime Ewe Management.

“We appreciate that wool prices must lift to keep and attract more woolgrowers.

The retail, brand and manufacturing partners joining our marketing programs are increasing as reflected in increasing revenue from Woolmark licenses,” he said.

“We will continue to find innovative fabrics using wool and seek new ways to exchange wool via the Wool Selling Systems Review.”