Further COVID restrictions in China are adding to the already labouring supply chain. Generally, the spot market remained solid with passed in rate steady at 10 percent.

Signs of fatigue appeared late in the week with the Fremantle auctions closing 15 to 20 cents down and the passed-in rate rising to 30pc in the fleece wools.

The forward market remains quiet, but levels relatively unchanged. Buyers seem to be prepared to defray some of their risk marginally under today’s cash with a base set on both 19 micron and 21 micron out to June 2023.

Increased seller interest appeared as the week progressed as the general risk profile of global markets remained high. That increased interest triggered movement on the buy side which culminated in February 2023 19 micron trading at 1700 cents, which is flat to spot. This looks to be fair value for both sides.

Surprisingly, selling interest seems more focused for the moment on the final quarter of this season with offers across April/May and June flat to cash. New season and New Year offers are hard to come by and therefore restricting downstream risk management in the pipeline.

Where to from here? It is difficult to see short relief from the current malaise. Demand is still there and responsible for the market holding resolutely against the odds. A put back to the seasonal lows (19 micron 1620 cents and 21 micron 1220 cents) seems unlikely while the forward base holds at 1660 cents and 1300 cents respectively. 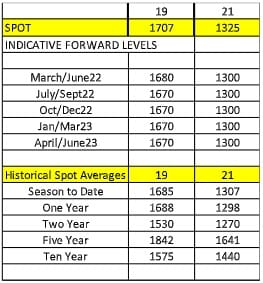