AUSTRALIAN Wool Industry Medals have been awarded to six recipients, including leaders from the processing, broking, private treaty and research sectors.

The fifth cycle of medal presentations were planned for Wool Week in August 2021 but due to COVID lockdowns, WIA was not able to complete 2020 and 2021 presentations until now. Two 2020 medals were presented last year; to Richard Halliday and Kevin Gellatly.

The medal recognises men and women who have made an exceptional and sustained contribution to the Australian wool industry.

WIA chairman David Michell congratulated the 2020 and 2021 medal recipients and thanked them for their contribution to the Australian wool industry.

“Unfortunately, due to the impact of COVID-19 with restrictions in all states and regions, WIA made the decision to cancel the presentation in August.

“It was hoped that we could gather as an industry to celebrate with all the six recipients,”

“This hasn’t been the case and the decision was made to recognize the recipients in their home state.”

Mr Michell said it is very timely that we acknowledge and celebrate the contribution of outstanding people to this iconic Australian industry.

“It has been a tough two years for all.

“The industry has faced many difficult times over the past three decades and the contributions that people like our recipients today have made has ensured that many in the industry can enjoy and prosper in the future.”

Presentations at the three state wool selling centres and a separate event in Melbourne were attended by family and friends of the medal recipients. 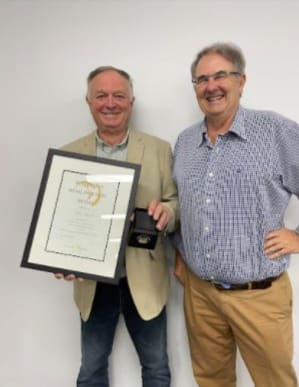 WIA said Michael Manion Wool Industry Foundation chairman Ken Stock was awarded his medal in recognition of the exceptional contribution he has made in leading industry charitable services.

Ken is well known in the wool industry as an exporter for over 50 years. He worked for Fox & Lillie before going into partnership with Graeme Kellet and John Allen, and now runs this own business Stockwool, trading scoured and carbonised wool.

Ken was a good friend of Michael Manion, whose passing in July 2014, inspired some colleagues to form the foundation in 2015. The foundation has run many fund-raising events to support rural families in need.

Under Ken’s guidance, the foundation has also expanded to include representation from northern and western region exporters; and to include brokers as well as exporters in the network who identify people who need the foundation’s support.

Wool exporter and broker recognised for advocacy and excellence Exporter Andrew Blanch was awarded his medal in recognition of his exceptional contribution in the areas of exporting and industry advocacy.

Andrew is a strong and passionate advocate for wool and in particular the superfine Merino industry. He has served as an AWEX director, on ACWEP’s executive committee of ACWEP and chaired the FAWO Industry Compliance Working Group. , worked on numerous industry committees and has spoken at many grower events. Andrew is the principal architect of SustainaWOOL, the largest grower integrity scheme in Australia and has advocated the importance of improving wool quality, integrity and growers connecting with their customers.

Broker John Gray was awarded his medal in recognition of his exceptional contribution in wool brokering services.

He has served the wool and sheep industries for more than 50 years and is recognised as a perfectionist when it comes to attention to detail for his wool grower clients, John has earned the respect and confidence of exporters for managing a first-class wool rehandle facility, is community-minded and provided excellent wool and sheep/ram and stud selection services to his clients. He is long-time steward at the Sydney Royal Easter Show and was awarded Sydney Royal Agricultural Show Legend status in 2015. He is also a regular judge at fleece shows in Sydney, Dubbo, Canberra and regionally in New South Wales. 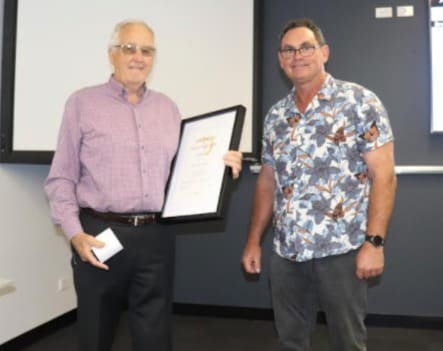 Dyson Wools co-founder Ken Dyson was awarded a medal in recognition of his exceptional contribution in representing private treaty and Western Australian interests.

In 1979, Ken and brother Terry established the private wool buying business Dyson Wools, which has grown into a large Western Australian company marketing wool privately, at auction and overseas, as well as supporting country football. He was managing director until his retirement in 2005. He has been WA state and national chairman of the Private Treaty Wool Merchants. He also represented WA wool growers in the Australian Wool Corporation reserve price scheme years. 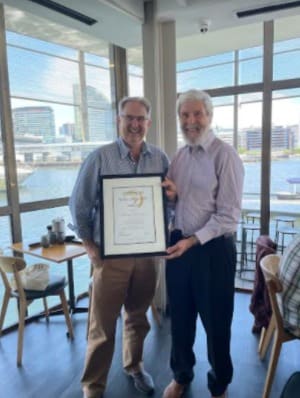 Bob Couchman was awarded his medal for his exceptional contribution in the area of metrology and wool science. His industry involvement spans more than 60 years, starting in 1962 as a wool classer.

He was appointed as the Australian Wool Corporation’s national controller for fibre specification to advance the use of additional measurement in Australia after completing his Masters degree and research on metrology.

Bob’s passion and knowledge in metrology led him to be a significant contributor to international research publications and seminar proceedings around the world, with more than 20 technical papers presented. Bob has also served on several industry committees, attended many IWTO congresses and is a regular contributor to IWTO Technical and WIA Technical meetings. 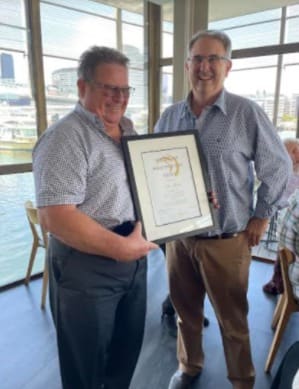 John Lewis was awarded the wool medal in recognition of his exceptional contribution representing industry interests nationally and internationally.

He has been involved in many parts of the wool industry pipeline, sharing his time, knowledge and expertise, even after retirement, and is well respected. He was a former AWTA Ltd product testing divisional manager and was managing director of Macquarie Textiles.

From 2005-10, John was FAWO chairman, and representing the Australian wool industry, he led a committee into China and initiated the China Australia Joint Working Group in 2007. Through FAWO, he co-ordinated the Australian contribution to the IWTO Test Marketing Campaign. After stepping down as FAWO chairman he continued on as the FAWO arbitration chairman and then with WIA. His knowledge and experience in business, arbitration and dispute resolution ensured that Australian exporters were well represented in disputes with overseas customers. He has continued his industry involvement as a mentor.

Applications for the 2022 Australian Wool Industry Medal will open early in 2022.