DESPITE the forward market trading constantly in low volumes during the recent three-week auction recess at or above cash levels out until August 2022, the spot market disappointed this week.

The major impact of the auction market falls came on the first day, with the fine microns losing up to 100 cents (5 percent) and medium micron 40 cents (2.8pc).

Confidence in the opening began to wane early in the week, with the few sellers taking advantage of flat to cash bids into the New Year. Buyers initially maintained levels, but pulled back slightly as sentiment strengthened around a weaker opening.

Forward trades for the week were confined to the 19 micron contract. The spot market dropped 70 cents to settle just on 1700c/kg. Buyers continued to step up, but lost interest in the early Spring months. Trades continued to go through at 1730c/kg as we closed off the week, but the weakness of the spot market is weighing down the confidence of buyers.

The high passed-in and withdrawal rates — around 60pc of fleece — to close the auction week makes predicting likely outcomes for next week a lottery. The forward market seems to want to hold as evidenced by the current forward bid levels. The drivers of the spot market seem to wax and wane and will probably lead to continued volatility.

Options will likely still present themselves for growers looking to hedge, especially for the New Year and in the broader microns. Bidding remains flat to cash for the remainder of the year building to a premium for 2022. 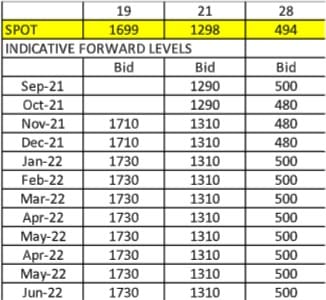