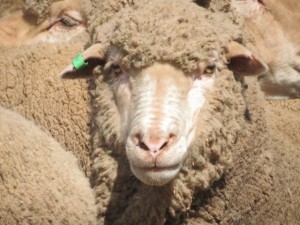 AUSTRALIAN sheep and wool prices are expected to continue to rise over the next three years, according to the latest ABARES forecasts.

And Australia’s sheep flock is expected to reach 77 million by 2020-21, the agricultural forecaster has predicted. 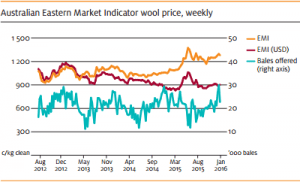 Wool prices this year will be supported by an assumed lower value of the Australian dollar and a forecast fall in wool production and the further lift in the EMI the following financial year will be supported by forecast moderate growth in export demand, ABARES said. Recovering economic activity in major consuming economies, including the Eurozone, is also expected to result in a modest increase in consumer demand for woollen garments and apparel.

“The EMI is projected to average around 1212c/kg in 2020–21 (in 2015–16 dollars), reflecting an increase in wool production in Australia and other major producing countries and an assumed gradual appreciation of the Australian dollar. 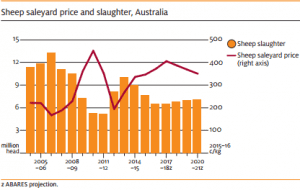 “This reflects an expected reduction in adult sheep turn-off and greater restocker demand as producers rebuild their flocks under the assumption of favourable seasonal conditions.

ABARES expected sheep numbers to increase slowly to around 77 million head by 2020-21.

Over the medium term, assuming average seasonal conditions, with producers looking to increase sheep numbers and an ongoing trend towards sheep meat production, the proportion of breeding ewes in the flock and lambing rates is expected to rise.

The number of wethers (non-breeding sheep kept for wool production) in the flock is forecast to rise slightly over the outlook period, reflecting higher wool prices.

ABARES said in the first half of 2015-16, saleyard turnoff, particularly of lambs, increased in regions adversely affected by seasonal conditions.

“However, significant rainfall in eastern Australia in late January and early February 2016 has led to increased restocker demand and, as a result, sheep numbers are forecast to increase slightly in 2015-16 to around 70 million head.

“If seasonal conditions are favourable in 2016-17, graziers are expected to continue to increase sheep numbers,” ABARES said.

However, forecast higher saleyard prices will encourage lamb and older sheep slaughter to meet strong demand, especially for export. By the end of 2016-17, sheep numbers are forecast to rise by 2pc to around 71.4 million.