Wool and cotton spin the yarn of natural fibre biodegradability 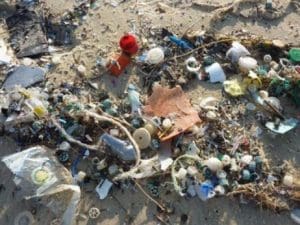 Man-made synthetic materials are becoming an increasing problem on land and at sea. Picture – AWI.

WOOL has united with cotton to spread the good news about natural fibre biodegradability around the world.

As part of efforts to include the use phase of garments and the impact of microplastics in life cycle assessments, Australian Wool Innovation and the Cotton Research and Development Corporation have joined forces to demonstrate the eco-credentials of natural fibres.

Amid increasing concern about the environment impact synthetic textiles, the reports prepared by Adjunct Associate Professor Beverley Henry of the Queensland University of Technology with senior researcher Dr Kirsi Laitala and Professor Ingun Grimstad Klepp of SIFO, shed light on the current knowledge of the impact of synthetic fibres on the environment in comparison to natural fibres.

Dr Henry said the reviews showed that clothing made of different materials are used and reused differently, and therefore fibre content is a relevant category to be taken into account.

“It is particularly relevant in assessment of potential for microfibre pollution since natural fibres are biodegradable and do not contribute to accumulation of plastics in the environment.

“Without intervention the growing production, consumption and waste generation of plastics together with their resistance to breakdown means that their abundance is set to increase,” she said.

AWI’s Program Manager for Fibre Advocacy and Eco Credentials Angus Ireland said rapidly emerging evidence is showing microplastic fibres from textiles pose a great risk to the environment due to both physical and chemical impacts.

“Natural fibres such as wool do not pose this risk because they readily biodegrade and consequently don’t accumulate in the environment.

“This important difference between natural and synthetic fibres needs to be accounted for in life cycle assessment for it to be credible and scientifically defensible,” he said.

AWI said man-made synthetic materials are becoming an increasing problem both on land and at sea. It is estimated that as much as 20-35 percent of all primary source microplastics in the marine environment are fibres from synthetic clothing and this amount is increasing. There is now significant evidence of the negative impacts on aquatic habitats and marine organisms from this pollution, while the full extent of the impact on human health is yet to be known, AWI said.

Natural fibres biodegrade on land and at sea 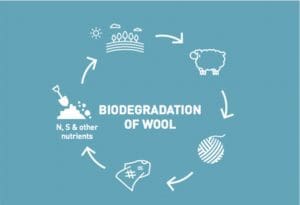 AWI said the full extent of the detrimental effect of synthetic microfibres on the environment is yet to be fully understood, but the current research suggests physical, chemical and biological impacts are felt throughout the food chain including leaching of toxic chemicals and eventual starvation of host organisms. Research is also yet to clarify how the consumption of contaminated organisms such as shellfish may affect humans.

The review recommended increased use of natural non-synthetic materials in global textile markets, since these fibres biodegrade in marine as well as terrestrial environments and therefore do not cause microplastic pollution. A series of factsheets has been created to illustrate this.

Environmental ratings agencies for apparel currently only assess the production phase of textiles which means that the way in which a garment is used and its eventual disposal is not yet considered when assessing the fibre’s environmental impact, AWI said.

The review confirmed that in the use-phase, in comparison to synthetic garments wool clothes are washed at lower temperatures, washed less often, are less likely to be tumble-dried, have on average a longer life-span and are more likely to be recycled. This comparison contributed to the understanding of wool as an environmentally responsible fibre in comparison to its synthetic counterpart, AWI said.

AWI said both papers align with current concerns about society’s trend towards disposable clothing or “fast fashion” and build on the argument for buying more sustainably, buying less often and buying apparel made from naturally biodegradable fibres.

Use phase of apparel: A literature review for Life Cycle Assessment with focus on wool