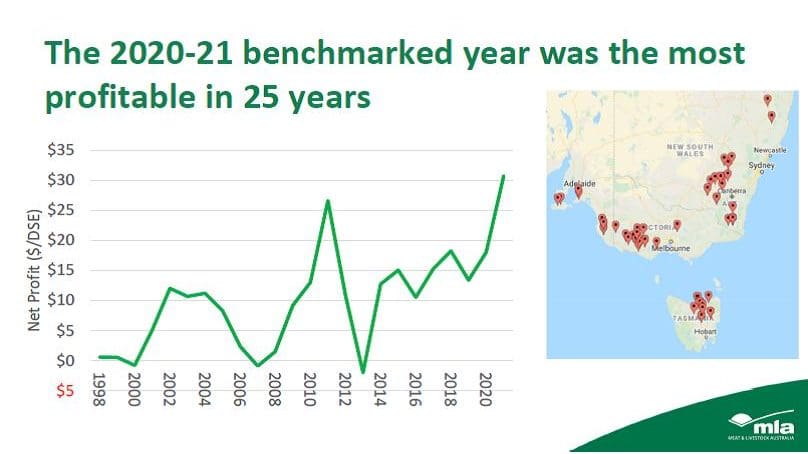 AUSTRALIA’S leading prime lamb producers generated historically high profits on the back of higher prices and a better season in 2020/21.

But the recent benchmarking figures released by Aggregate Consulting show the prime lamb operators did not on average perform as profitably as beef and wool producers benchmarked across south-eastern Australia. 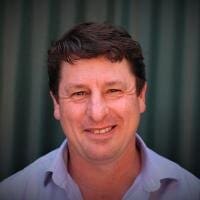 In Meat & Livestock Australia’s Beef and Prime Lamb 2021 Benchmarking Review webinar on Wednesday, Aggregate Consulting director Sandy McEachern said specialist prime lamb enterprises in 2020/21 have averaged their highest ever profits of $31/DSE, beating the previous highest in 2011 of $28/DSE. The average profits for beef herds and wool flocks in the same areas was $38/DSE. 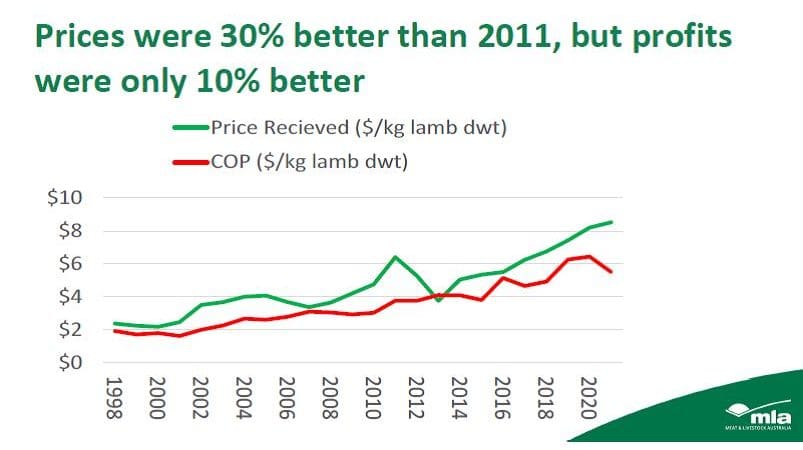 “It was a great year for prime lamb by historical standards, but probably a little bit disappointing that it wasn’t as good as beef and wool,” Mr McEachern said.

He said the lamb profit result did not support press reports in recent months commenting on how much more profitable prime lambs might be as a reason for producers “swinging that way.”

“It is not that the ‘swing’ is not on, it’s just that it is not for profit reasons.

“That’s just something to keep in mind with regards to the future of the industry I think.”

After the webinar, Mr McEachern said at the end of the day every commodity is competing for land on which to produce.

“Sentiments will carry an industry so far but sooner or later the industries have to address underlying profit issues if there are any.

“If producers are swing to lamb from wool because it is ‘easier’ rather than more profitable, well they will swing past prime lamb into beef.”

High production separates the best from the rest 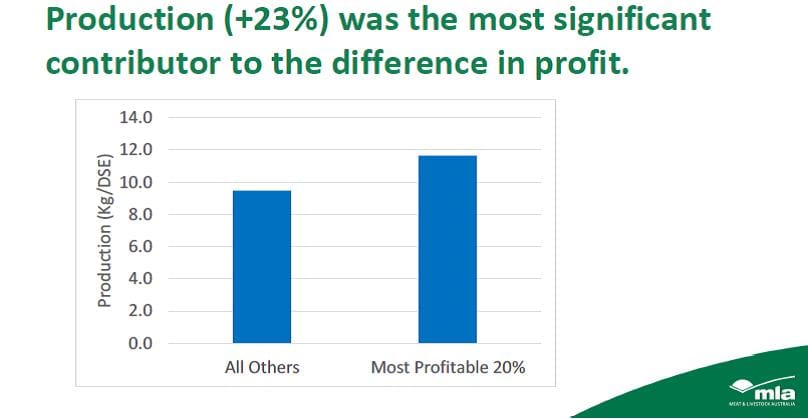 Mr McEachern said the key difference between the most profitable prime lamb enterprises and the rest was production, best captured as lamb production (cwt) per DSE.

“That’s not a new story, but it needs to be repeated year in year out.”

He said the most profitable 20 percent of the enterprises generated just under 12kg (11.6) of lamb per DSE and the average of the remainder of the database was 9.5kg/DSE, which is the best result ever for the other 80pc.

“The key contributor to that difference in production per DSE was lamb growth rate to sale.

“The most profitable 20pc averaged 270gms per day and the average of the remainder was 225gms per day.” 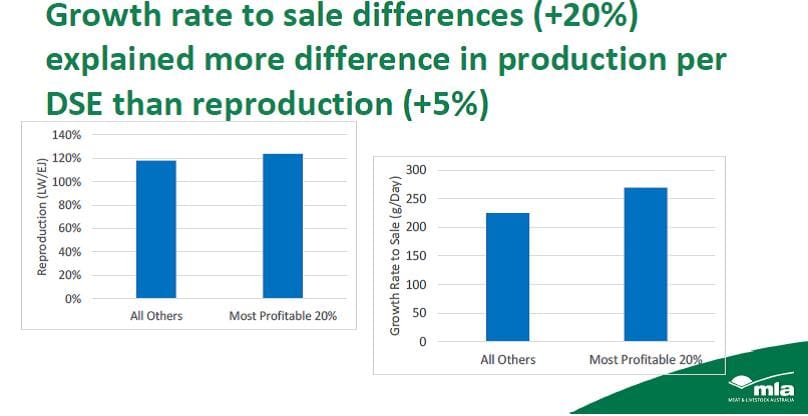 Mr McEachern said by those numbers it looks like there is still plenty of opportunity for improvement within lamb businesses. 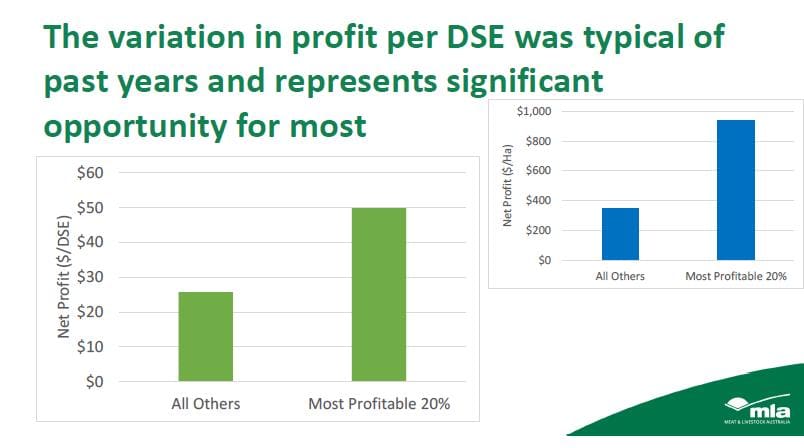 He said lamb prices were at their highest levels ever for the year measured at more than $8/kg dressed weight, including skin value, with rainfall averaging about 780mm across all enterprises, compared to a long-term average of about 700mm. 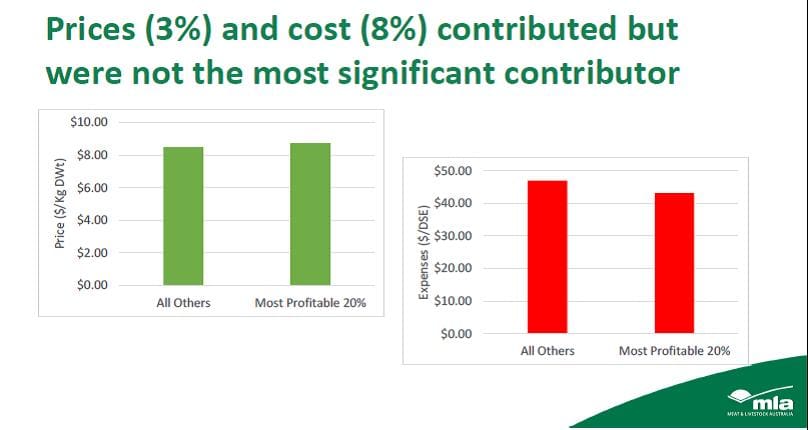 Mr McEachern said the variation in prime lamb profits was typical of past years, with the top 20pc operations achieving an average of $50/DSE, and all others averaging $28/DSE.

When ranked on a per hectare basis rather than a per DSE basis the top 20pc of lamb enterprises achieved triple the net profit/ha of the rest.

“We are now seeing a reasonable cohort of prime lamb producers who are generating that $900-$1000/ha of profit.

“So that’s a really good outcome by historical standards. Those levels of profit are going to be a necessary if we want to maintain return on assets given that land values are increasing rapidly,” he said.

“These are the sort of numbers we are going to have to push towards to generate historical returns like 3pc return on assets under management.”

Mr McEachern said the most profitable 20pc lamb enterprises achieved an average 3pc higher price than the rest – instead of $8.48/kg it was $8.73/kg lamb sold.

The top 20pc achieved a cost base 8pc lower than the other enterprises, predominantly driven out of overhead costs, labour and labour-related costs, he said.

“Direct costs, which include supplementary feed, were actually a little bit higher, but the overheads costs were lower.” 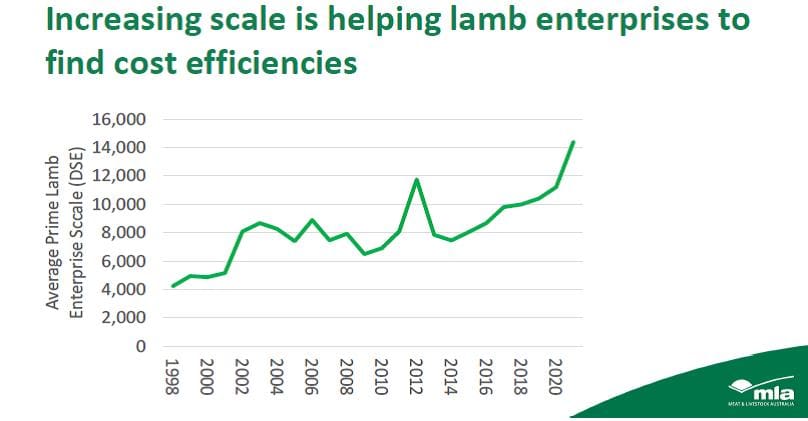 Scale had also helped with the cost structures of prime lamb enterprises, he said.

“Where 20 years ago we benchmarked a lot of really small-scale enterprises, we are now seeing an average of around 14,000 DSE, that is equivalent to wool flocks.”

But Mr McEachern said lamb production per DSE was the most substantial contributor to profit, as seen by the 23pc difference in this between the top 20pc operations and the rest – 11.6kg/DSE versus 9.5kg/DSE.

“Production per DSE is really driven by both the reproduction rate or the growth rate to sale of the lambs.

“Growth rate to sale was the main contributor.”

Mr McEachern said there was a five percent reproduction rate difference between the top 20pc and the other producers and the most profitable flocks weaned 124pc of lambs to ewes joined, including ewe lambs.

“None of these production numbers are a stretch really in terms of what we can achieve, which is good news… we think there might be more upside if producers can find ways to get the best combination of these numbers rather than focussing on any one of them individually.”

He said lamb growth rate to sale explained 20pc of the difference in production per DSE between the two groups – 270gms per day versus 225gms per day. The 45gms per day difference amounted to 8kg of liveweight over 180 days to slaughter, or meant it would take 30 fewer days to get a lamb top 45kgs liveweight from birth. Though Mr McEachern didn’t consider 180 days was a “sweet spot”, advising producers to avoid risking dragging growth rates down by holding lambs into Summer. 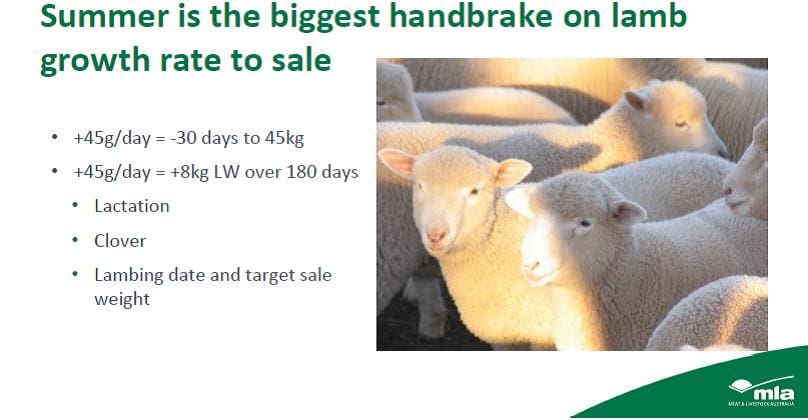 “It comes back to a systems issue, which tends to help drive those growth rates to sale, and that relates to looking to your resource base.

“Working the system that best fits your growth rate to sale is really important.”

Mr McEachern said it is production — lamb growth rate to sale — that is still the key opportunity for most producers.

Ewe breed type not a factor

On ewe breed type in the database flocks, Mr McEachern said there were more composite ewes coming into the database and fewer traditional first cross ewes over time.

“Every time we have looked at that issue we have not come up with a clear advantage by breed.

“That is the hidden costs associated with production from ewe lambs.”

Why did wool operations perform better than lamb?

Mr McEachern said a key driver was the recovery in wool prices from COVID lows that was captured by a large proportion of the database’s growers.

“And that wool price by historical standards was extremely good, particularly at the fine end.

“And I think the other thing was that those wool flocks are getting plenty of value out of the meat side of the business as well,” he said.

“They’ve capture both the meat and the wool side of it, without even having to get focussed on the meat side.”

But when asked if the wool producers focussing on meat traits featured in the top 20pc, he said:

“Basically what that’s saying is that meat trait side has an impact on stocking rate per hectare and how we go about it” he said.

“And so while it looks good per DSE, I’m not equally convinced that I could then run the same stocking rate per hectare doing it, and achieve the production goal that I’m chasing out of the meat side at the same time.

“Looking at this data over a long period of time, I still am not convinced that the people with Merino sheep should take that path.”

Mr McEachern said wool producers are very good at managing their costs and he was more worried about the cost of production trend for lamb than for beef.

“If you look at the trend lines over time, lamb cost production has tracked price fairly consistently and the margins between price and cost of production haven’t increased like they have in both wool and beef.”

“I think over the years there has been a lot of distractions along the way, and to some extent probably still are, and so the industry is still maturing in that respect.”