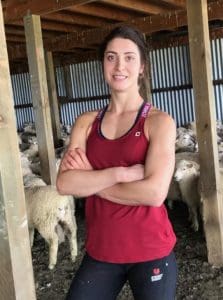 A WORLD shearing record attempt will be judged virtually for the first time when New Zealand’s Megan Whitehead tries to shear more than 648 strong wool lambs in nine hours this week.

The 24 year-old shearer will make her attempt at the Grant Brothers woolshed, at Croydon Bush, Gore North, on Thursday, January 14, starting at 5am and finishing at 5pm.

COVID-19 pandemic travel restrictions meant that the overseas judge required under world rules could not attend the record attempt. However, organisers have been trialling Zoom technology that will allow New South Wales shearing judge Mark Baldwin to officiate from his home in Tocumwal. He will watch Megan as she shears and pass his assessments to another referee in the shed. 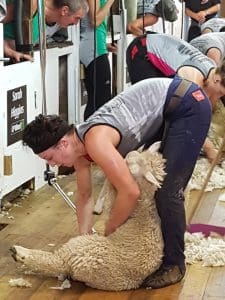 Megan Whitehead in action during the successful four-stand record attempt.

Megan Whitehead is a daughter of former shearers Quentin Whitehead and Tina McColl. She is already a joint holder of the world four-stand nine-hour women’s record of 2066 lambs set in the central North Island on January 23 in 2020. She sheared a personal best of 608, the best of the day and at an average of 67.5 an hour. The level she needs to attain on Thursday to break the record of 648 is 72 an hour, which highlights the enormity of the task ahead.

Under the auspices of the World Sheep Shearing Records Society, there are standard rules, with five “runs” during the day, from 5am-7am, 8am-9.45am, 10.15am-Noon, 1pm-2.45pm, and 3.15pm-5pm, separated by one-hour breakfast and lunch breaks, and half-hour morning and afternoon “smoko” (morning and afternoon-tea breaks).

Five judges have been appointed, including Mark Baldwin watching from Australia, to ensure appropriate quality and record rules are adhered to. Judges will on Wednesday oversee the shearing of 20 sample lambs, from which the average clip must be a minimum of 0.9k of wool per lamb for the attempt to go ahead. During the attempt the judges may remove individual sheep from the tally or even call the event off early if the quality is below the required standards.

In the record 13 years ago, Emily Welch shore 144 in the two hours before breakfast followed by successive 1hr 45min runs of 125, 123, 127, and 129. More than 70 people will be involved in making sure the record attempt runs smoothly on the day.