Will no change to AWI’s board culture lead to its own demise?

AUSTRALIAN Wool Innovation’s 2019 director election could have more hinging on it than just board or cultural change at the levy and taxpayer-funded company, according to market, levy income and industry trends.

Australian Wool Growers Association director, Merino breeder and non-mulesed wool producer Martin Oppenheimer believes the future of the Merino flock, AWI and even the future marketing of Australian wool could depend on the election result.

According to Mecardo analyst Andrew Woods, with reduced wool production, lower levy returns and wool prices, AWI is facing a potential halving of levy income in 2019/2020. Mr Woods has suggested wool levy receipts are likely to fall from around $68m last season to between $36-$45m this season and gross revenue will reflect this fall, as the wool levy is the main component of revenue for AWI. Click here to read the full Mecardo story.

Mr Oppenheimer said this meant AWI would have to reduce project funding and possibly cut staff numbers at a time when sheep meat prices were at record levels and the Merino flock needed to be rebuilt and targeted marketing continued.

“So this policy they’ve had of the last few years of duplication, not collaborating with other industry bodies – for example WoolQ – is making the situation even worse.

“So too many projects, too many people, not enough leveraging of the existing income and then this perfect storm of high sheep meat demand and prices.

“With this perfect storm of high sheep meat prices due to African Swine Refer in Asia, will the wool industry ever recover?” he asked.

“The back up for people who want to stay in sheep is to move to lamb, which, unlike wool, has been able to grow value and demand.”

AWI chief executive officer Stuart McCullough recently told Farmonline that he would be seeking more money from reserves to cover the expected income shortfall, although the board was unlikely to agree to more than $30 million. He said AWI had budgeted on total revenue of about $74m in 2019-20, but as of November 1, that figure was shaping up as more like $64-$66 million.

Mr Oppenheimer said there will be incredible pressure on cash-strapped farmers to maintain their income and farms, “let alone to rebuild the flock” and there has been a continual decline in the Merino portion of the national flock with significant “slippage” to the lamb industry.

“So they (the current AWI board) just doesn’t have the answers.

“This leadership that got us to this point, there is a zero chance that they can lead us out of it,” he said.

“This current leadership is going to continue the decline, it is not going to lead us to a better place.”

Mr Oppenheimer is concerned that AWI has overspent its reserves in recent years, instead of winding back spending. Mecardo estimates AWI expenditures ran at 98 percent of revenue in 2018-2019.

He expected AWI’s reserves to be extinguished within two years and then there would need to be major cuts.

Mr Oppenheimer said it will be interesting how growers vote at the next WoolPoll in two years’ time.

“If the old board members are re-elected, it could be just a wipeout (a majority vote for the zero levy option).”

Mr Oppenheimer said other issues adding to grower disenchantment with AWI included the “nearly impossible” likelihood of getting 75 percent shareholder approval for constitutional changes at the 2019 AGM, with only about 35 percent of wool levy payers registered to vote.

“So the EY review was always flawed in that there was never a mechanism there to actually enforce it unless the minister stepped in.

“They delayed and they distracted and made it difficult, there is no doubt about that,” he said.

Despite the EY review recommending a redefining of AWI director independence, a restructured board nomination committee structure and 10-year director tenure, Mr Oppenheimer said the fact that former chairman Wal Merriman and director David Webster were able to get the recommendation of the BNC and the AWI board, showed there had been no cultural change.

“The culture is continuing and if the industry is to move forward the culture needs to change.

“We are going to lose a third of the value of the Australian wool clip this year, AWI is going to half of its income this year and there has been almost zero discussion of where the cuts would be made.”

AWI governance and leadership has distracted the industry

Mr Oppenheimer suggested that AWI’s decline in income was partly due to AWI’s poor governance and leadership distracting the industry from important priorities, such as the impact of mulesing on Australian wool marketing.

“That comes back to focusing on the consumer and what consumers want.”

Mr Oppenheimer conceded that the US-China trade war has had a massive effect on global retail confidence and wool prices, but the reduction in wool supply had been occurring over a longer period.

In a recent letter to shareholders, Mr Merriman, Mr Webster and Dr Humphries voiced their support for continued mulesing and defended growers’ ability to care for their sheep with “the best current practices”, but without specifically supporting mandatory pain relief, renewed breeder efforts to breed plain-bodied sheep to avoid mulesing or tools such as breech scoring.

With premiums for non-mulesed wool running at around 100c/kg at auction and higher in contracts, AWI chair Colette Garnsey was asked if she was concerned that the attitude to mulesing of the preferred director candidates could jeopardise the future marketing and pricing of Australian wool.

Ms Garnsey did not reply, but an AWI spokesperson said AWI’s short-term goal is to replace or refine traditional mulesing with welfare-improved practices, including the use of anaesthesia and analgesia.

“In the longer-term AWI’s goal is to reduce the reliance on mulesing through non-invasive management practices and breeding programs.”

Mr Oppenheimer said the Merriman ticket was playing “the mulesing card” but it would not work for them, “because it is not working for the industry”.

“It is part of the reason for the decline in the value of the Australian wool clip, as we’ve seen demand shift away from Australian wool to wool from other countries that have addressed consumer concerns.

“It also highlights how AWI has failed to come up with a solution to this problem,” he said.

He said the current alternative to mulesing – freeze branding – was initially funded by AWI and then dropped.

“The only solution that is working across the industry that is working and AWI part-funded with MLA and the Sheep CRC has been the breech scoring, a successful innovation they have chosen not to promote.”

Mr Oppenheimer said if Wal Merriman and David Webster are re-elected AWI, in its current form, will not exist in 3-5 years, due to levy income loss and coming research and development corporation changes.

Fellow AWGA director Robert Ingram this week said the body is urging shareholders of the wool research, development and marketing body to strongly vote for change before the AWI annual general meeting on 22 November “and end the turmoil that has surrounded the current board for the last three years”.

“We fear that if we do not vote for change the current review of the rural development corporations will recommend that AWI be rolled into MLA and then we, as wool growers and the wool industry, will become irrelevant.” 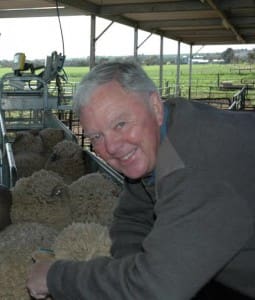 Former AWI director John Keniry also agreed with the AWGA position, and said unless there is major change on the AWI board, the Federal Government would merge AWI into Meat & Livestock Australia.

“Until they (the Federal Government) makes a decision it just has to stay as it is.

“If there is to be any change, it will come as a recommendation of the (RDC review) committee.”

Neither the AWI chair Colette Garnsey nor Mr McCullough responded to questions about what was AWI’s strategy to increase wool prices and win back grower trust to lift the levy rate. Nor would they state whether this meant AWI’s survival would mean deeper cuts.

However, an AWI spokesperson said the impacts on AWI’s revenues are well known – “the reduced WoolPoll levy, a reduction in the supply of wool largely caused by the drought and recent movements in wool prices”.

“As we said at the time of WoolPoll 2018, AWI has always adjusted its budgets according to the revenue it receives to ensure it invests wool growers’ funds efficiently and effectively.

“Any reductions in our budget will be applied across the company, including to the human resources of the business,” the spokesperson said.

“However, we are absolutely committed to continuing to invest in the priority R&D projects and marketing campaigns that will make the greatest difference to wool growers, particular at this challenging time for the industry.

“Our drought relief tools on recovering and sustaining an enterprise in these tougher times are all public at https://www.wool.com/on-farm-research-and-development/sheep-health-welfare-and-productivity/sheep-nutrition/awi-drought-resources/ along with our extension networks that are running education programs to help wool growers.”

AWI is committed to world-class governance

Ms Garnsey also did not respond to questions about industry concerns about AWI’s failure to implement several of the major recommendations of EY Review to deadline and its disregard of the review’s recommendations and intent on director independence, governance and tenure – as shown by the BNC and board’s recommendation of Mr Merriman, Mr Webster and Ms Humphries.

Ms Garnsey also would not comment on AWI’s inaction on the EY review’s 10-year director tenure proposal and whether this could jeopardise AWI’s ability to maintain its current structure in a review of agricultural research and development corporations.

Despite numerous requests, Sheep Central has been unable to organise an interview with Minister for Agriculture Bridget McKenzie to discuss AWI, but a spokesperson said: “AWI is an independent company and the election of directors to the AWI board are a matter for AWI and its shareholders.”

“AWI advises that it has completely implemented 41 of the review’s 82 recommendations, with implementation of a number of recommendations to be considered by shareholders at the upcoming AGM.

“The Department of Agriculture meets monthly with AWI to receive updates on their progress in implementing the review recommendations,” the spokesperson said.

“I would encourage AWI shareholders, who are wool levy payers, to actively engage in exercising their shareholder rights and obligations, to help shape the future of the company and ensure their expectations about due process are met.

“The government’s current review into modernising Australia’s agricultural research and development sets a clear expectation that the RDCs will look at their governance structures with a view to ensuring they are world’s best practice,” Ms McKenzie’s spokesperson said.

An AWI spokesperson said AWI welcomed the minister’s commitment to modernise Australia’s RDCs and will be making a submission to the review.

“AWI is committed to world-class governance standards, including the full implementation of the recommendations of the Review of Performance.

“The overall (EY review) implementation rate is currently at 88 percent and will rise further if shareholders approve recommendations at the AGM,” the spokesperson said.

“As an RDC, AWI has several unique features that foster transparency, accountability and governance best practice – including the triennial WoolPoll and independent review of its performance, its democratic ownership structure and shareholder voting rights and its commitment to continuous consultation with the Australian wool industry.”