Will 2021 be the year for lamb payments on IMF and meat yield? NEW South Wales lamb processor Gundagai Meat Processors could be paying producers on a lean meat yield basis for lambs that meet a minimum intramuscular fat threshold by next year, if IMF measurement trials are successful.

Mr Barton said he hoped that within the next month or two GMP will be at the stage where it can give a “scatter graph” to a lamb supplier with hot standard carcase weight, lean meat yield and disease and defect data on individual carcases.

“The intramuscular fat thing is obviously the focus of a lot of effort at the moment and that’s up to the R&D guys to deliver us something that is appropriate.

“We would hope that’s sooner than later.”

Payment to come for LMY at IMF minimum

Mr Barton said initially, provision of the HSCW, LMY and Health4Wealth data to producers would be for the purposes of feedback.

“Firstly, it will be just for the interest of the farmer, so ‘disease and defect’ data can be acted to increase your own profit and lean meat yield is something that people will be interested in.

“As soon as we have an intramuscular fat measure operating with some level of accuracy on site then the first thing we will do is pay for lean meat yield where a minimum IMF percentage has been met – I think that’s phase one,” he said.

“I think that is potentially a calendar year 2021 kind of proposition and that paying for lean meat yield is purely because we can get better yield without compromising quality.

“So it is assuming that the market is not going to pay any more for that article, GMP will just lose less fat during boning and we will get a better yield.”

Mr Barton believed the next step in value-based payments would come when it can be demonstrated that the market is willing to pay more for product with a high IMF.

“Then we will pay on IMF and yield in combination.”

“I expect over the next 3-6 months we will have a high level of insight as to how far away that is going to be.

“If the trial we are doing now is successful, I would imagine that in calendar year 2021, where lambs consigned to GMP meet a minimum a minimum IMF threshold, that we will be paying bonuses based on lean meat yield.”

Mr Barton said for the moment, producers would have to rely on genetics and genetic selection as their own safeguard for IMF, “such that when there is a measure they know that they’ve been selecting the right genetics to ensure they are on the right side of this revolution that I talk about.”

He said the GMP hot side DEXA been fully operational on the slaughter floor for 18 weeks and 40-100pc of lamb carcases processed in any week are scanned by the machine.

Mr Barton said GMP sees it has a critical role to play in getting feedback from the consumer to the producer in terms of what to breed, to grow and what attributes consumers are looking for.

He said the lamb industry is currently based around weight-based thinking and fat score or condition (within the age or dentition limits) with no quality grading.

“The critical element to this project is that we are converting what is currently mob-based estimates of different animal health conditions or defects in a carcase to individual feedback by carcase.

“So you will be able to take this information… and get an understanding of say whether arthritis is driving yield loss or weight loss in your population when you bring them to slaughter.”

Mr Barton said the third element of the GMP ‘carcase optimisation’ program would be intramuscular fat to assess eating quality.

“Obviously now that we are accurately able to forecast or predict the lean meat yield of a carcase a really critical element is to understand the intramuscular fat.”

But he urged caution, citing the New Zealand example where lean meat yield lamb payment systems based on Viascan have moved their IMF flock average down to just under 2 percent.

“We know that Australia’s (IMF flock average) is somewhere around the 4pc mark, so we need to be really mindful that before we take DEXA and use it from a producer feedback and pricing point of view that we IMF covered.”

Mr Barton said if IMF can be measured premiums cuts can be graded out and farmers can be given feedback to improve their genetics and livestock quality “so that in time they can be paid for those animals.”

Mr Barton said the fourth element of the GMP system is carcase optimisation, comprising the necessary tools and staff, and the infrastructure.

“We’ve got lean meat yield at accuracy, we’ve got Health4Wealth which will be launched in the next month…and we are waiting for IMF.

“What that data-rich environment creates is the requirement for two critical ingredients to be able to turn that information into some sort of meaningful success for a business,” he said.

“The other thing is you need someone internally who has the mental capacity, the intelligence, to be able to digest this and get it back into the real world, and for us that is Dr Michelle Henry, who is leading our charge in terms of being able to use this data-rich environment to our advantage. Mr Barton said the second thing needed is the infrastructure and GMP has invested heavily over the past three years in an advanced carcase chilling and sortation system involving no-touch RFID tracking of carcases to efficiently chill and grade carcases.

“It’s the combination of those two things, the understanding of what to do with the data that you’ve got and then being able to put action to that intelligence throughout your plant that gives you an increase in value across the entire supply chain.”

“It allows you to pay farmers in a targeted fashion for the (lamb) quality and they yield they are producing, it allows you to demand more from your consumers because they understand what they are getting and there are guarantees of that.”

Mr Barton said GMP’s former lamb chiller system involved seven chillers with ‘hot’ lambs loaded into them immediately post-slaughter, with no time to gather information about the population and with decisions being made on basis of weight and fat score. Hot and cold carcases have to be kept separate and it is very labour intensive, with no carcase tracking system beyond a tag, he said.

GMP has converted the same space into five chillers with every carcase passing through a first box post-slaughter for ‘stage one’ chilling and then into a ‘stage two’ chiller, with the others (chillers 3,4 and 5) acting as ‘sortation’ chillers, Mr Barton said.

“What that does for us, is it moves the sortation point to 2100 lambs post-slaughter and by then lambs are at about 10 degrees Celsius.

“So before we have to make our first sortation decision about any of the lambs that we have slaughtered, we know population level data – we’ve got 2100 lambs worth of information from that production run,” he said.

“So by maximising that time between data capture and sortation, we are able to sort from our best informed viewpoint.

“It overcomes the hot and cold carcase mixing issues, because every carcase that leaves the stage one and two chilling is down to about 10 degrees,” Mr Barton said.

“So those four technologies combined is really what comes together to create real advantage in the supply chain, but any one of those in isolation don’t really change the landscape, from our view.”

Mr Barton led webinar participants through a case study of lambs through DEXA assessment of lean meat yield and weight compared to defect and disease status to determine any correlations.

“The ability to understand lean meat yield and weight at a granular level and to be able to report on animal health or disease/defect data at a carcase level will give rise to (correlation) insights in a population.”

With an IMF measure, then processors can look at the relationship with LMY and carcase weight within a population, he said.

“There are no surprises in that data set, but the ability to be able to converse with a producer in this way and signal about what they are producing and where we want them to move is the critical piece,” he said.

The addition of animal health data, showed how specific diseases and defects were spread through a population in relation to weight, meat yield and IMF, he said.

“The final point that you get to, is that if you go back to the current paradigm of weight-based thinking that we have where a light lamb goes to the Middle East, a trade lamb goes to Australian domestic and a heavy lamb goes to export, you now generate a new part of the market by bringing all these pieces of data together.

“To say that if you can deliver something that is greater than 60pc in lean meat yield and over 5pc in IMF, as two arbitrary points, then we will pay you a premium for that product on that basis that we are able to achieve a greater price in the market.”

Mr Barton it is much more likely that a DEXA unit will become technically obsolete before it wears out, but the likely hand-held IMF units would probably be more consumable.

He believes the great challenge now is for industry to think through the impact of the cost of high versus high yielding (or low IMF versus high IMF) carcases as compared to the current averaging system.

“The challenge really for us now is to say how do we actually ease our way into value-based marketing and how do we make sure that we have the patience to wait for an IMF measure before we start tinkering with lean meat yield, perhaps at the expense of eating quality.”

He said the industry had the genetic tools to balance growth and lean meat yield with eating quality, and “switched on” breeders were starting using them, but price signals were needed to push the industry to respond properly.

We can really stuff up the product – Gardner 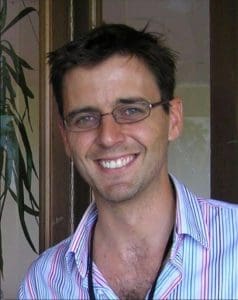 Associate professor Gardner said Mr Barton had made the crucial point that while there have been crucial advances in measuring LMY, if the industry was sent too strong a signal on LMY and did not have the corresponding eating quality measurement in place “we can really stuff up the product.”

Mr Barton said IMF is by far the most profound single measure of eating quality, and lamb had managed well using age, weight and basic breeding. But he found the height and demand at which lamb prices have reached as disturbing.

He said the lamb genetic trends showed that there is a counter-intuitive situation “where the lamb price is following caviar, but becoming like a chicken breast”.

“So you’ve got a chicken breast being incredibly high in protein with all the flavour and all the fat bred out of it and it’s pitched as the highly productive protein which is sold at a low price.

“And then you got a kind of a confused lamb category that’s on hand is developing itself to be more efficient in production, higher LMY and higher wait and still trying to hand onto this price premium for this product that’s got different attributes.”

He said the impact of eating quality measurements will lead more to a revolution than an evolution among breeders and in the industry.

“I think very quickly once this tech is in play, we will see big changes in the attitudes around genetics and markets.”