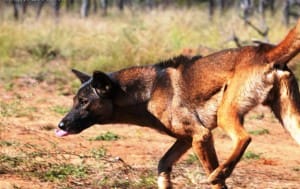 Imagine surviving a plane crash in remote cattle country, only to be stalked by an aggressive pack of wild dogs as you try to walk back to safety.

Wild dog horror stories from both sides of the Australian continent were heard at this week’s Meat & Livestock Australia annual general meeting in Brisbane, laying bare the severe impacts being caused to livestock enterprises across the country.

Vast pastoral tracts of Western Australia only suited to sheep and goat production can no longer run sheep or goats because of wild dogs, former WAFF president Mike Norton told the meeting.

Attacks on people will be next, he fears.

To illustrate his point, he told the conference about a recent real-life incident where a pilot survived a plane crash after experiencing engine failure between Mount Magnet and Meekathara in remote central WA.

“He put down the plane, but his biggest concern as he walked 25km from the crash site to the nearest homestead was that a pack of dogs was tracking him, going from one tree to the next,” Mr Norton said.

“He wasn’t too sure if he was going to get there.”

“We have never seen dogs cause losses like that,” the AgForce Queensland sheep board president said.

As neighbouring properties had moved out of sheep in recent years Mr Smith’s flock has become an increasing target for wild dogs.

The 9-10 month old wethers were worth around $100 each, not counting the value of future wool production.

The losses equate to $100,000 wiped from his bottom line in less than six months.

Mr Smith has recently trapped five large dogs on his property but believes at least two are left.

So what are the solutions?

For Sandy Smith, the only realistic option he now sees is to fully fence his boundary with exclusion netting.

With 12km of frontage to the Darling Downs rabbit proof fence and some existing boundary netting in place, the job is already partially done.

Completing the remaining boundary with netting will allow him to clean up dogs inside the fence and prevent similar predation losses in future.

In Western Australia, however, exclusion fencing will not be a feasible option for extensive pastoral stations, Mike Norton believes.

“You can probably do that in Queensland where you can run heavier stocking rates, but in the pastoral areas of WA it is just not economically viable to fence off huge tracts of land and to mop up all the dogs inside,” he said.

Just as radio-tracking collars were used to locate rogue bulls and donkeys during the Bovine Tuberculosis Eradication Campaign (BTEC) in the Kimberleys in the 1980s and 1990s, Mr Norton believes micro-chipping and drones could effectively help to control dogs in pastoral areas.

“In the BTEC program back in the 1990s you would catch a rogue bull and put a transmitter collar on him and then track him.

“He would lead you to where the cows or donkeys were and you would go in the chopper and take them out.

“We haven’t applied modern technology to eliminating wild dogs, the same as we did with TB in the Kimberleys, and I think we have to start thinking outside the square.”

“If we are going to expand the sheep industry in WA it has got to come from the pastoral region where there is good saltbush and good stock feed, but we can’t use it because of the dogs.

“It is a priority for the sheep industry and the goat industry too.”

“There is certainly work on the horizon coming around that,” Mr Murray said.

“I don’t see us spending millions and millions of dollars on (netting) fencing that may or may not work.

“I know in WA especially, with the rabbit proof fence it was a toss up which side of the fence had the most rabbits on it.

“I imagine the dogs would be much the same.”

Goat Industry Council of Australia president Rick Gates, who runs a goat production and depot operation at Wilcannia in far western NSW, said he was astounded to learn of the impact wild dogs were having on rangeland goat populations in WA, which was revealed in a recent report conducted on GICA’s behalf by MLA.

The report showed that wild dogs are the major factor responsible for “a precipitous decline” in rangeland goat production in WA. The report calculates farm gate losses caused by dogs to goat producers in WA at $11 million each year. More information on the report can be found on the GICA website here.