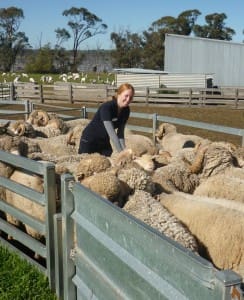 Not drenching sheep with higher condition scores can reduce drench costs and prolong drench effectiveness, a researcher in WA has found.

Sheep with higher body condition scores of around 3-plus (1 being extremely lean and 5 carrying excessive fat) are able to tolerate moderate worm burdens and are less likely to require drenching than animals in poor condition.

Murdoch University (WA) post-graduate student Meghan Cornelius said depending on the degree of severity of worm burdens, producers may be able to leave those sheep with the higher condition scores in the flock without treatment, which will minimise input costs and save valuable time.

She said the approach reduces the direct cost of drenching and, importantly, has the potential to prolong the effectiveness of chemical products before resistance develops.

Farmers can then focus on targeting the lower condition score sheep in the flock (under 3) which researchers believed are less resilient and far more likely to be adversely affected as a result of scour worm burdens, she said.

“With drench resistance becoming more prevalent Australian-wide, and the higher cost of new combination drenches, employing resistance management strategies is critical to a to the long term cost of managing parasites.”

While the strategy of targeted treatment was relatively new, Ms Cornelius said it was very important to understand that every property was different and that the same worm management strategies were not suitable for every environment.

The decision to utilise targeted treatment strategies needs to be made on a flock-by-flock basis, she said.

“Further research is determining how many sheep with higher condition scores we can leave in a mob before there is a negative impact on whole flock productivity,” she said.

Scour worm burdens are a major problem for producers in the southwest of WA due to the cool wet winters.

“The nematodes thrive in temperatures ranging from 16-30 degrees Celsius, and with moisture present the larvae develop in faecal material and then move onto the pasture, ready for sheep to ingest,” she said.

Operating as part of the Federal Department of Industry’s CRC program, the Sheep CRC is a collaboration of industry, government and the commercial sector. It is working to increase the productivity and profitability of the sheep industry through adoption of new technologies in both the meat and wool supply chains.

Part of the research project includes field experiments with close monitoring of body condition, body weight and worm egg count in order to compare the production responses between treated and untreated sheep. These experiments have been conducted in south-west WA on private commercial farms.

When she is not focusing on her PhD research program, Ms Cornelius is applying some of her research knowledge to her role as the Department of Agriculture and Food WA (DAFWA) sheep genetics extensions’ officer.

“While there is no direct link between my PhD research and the work I do at DAFWA, the work does go hand-in-hand as producers can pair targeted treatment worm management with use of genetic selection to achieve better resistance to worms,” she said.

“Producers can select sires with negative worm egg count ASBVs to further reduce the cost of parasite management,” she said.

Ms Cornelius expects to complete her PhD studies by mid next year. More information is available from www.sheepcrc.com.au