The amount of wool being put through the “dumping” process in Australia prior to export has shrunk by almost 50 percent in the past decade.

Once the vast majority of wool that left Australia’s shores was compressed into dumped bales to make it more efficient to export.

The dumping process involves using powerful hydraulic presses in wool stores to compact wool from farm bales into more tightly packed, steel strapped double- or tri-packed bales, which allows more wool to be packed into a container for shipping.

The process effectively maximises the payload of each container, allowing up to twice as much wool to be packed into a 20 or 40 foot shipping container than possible with normal farm bales.

However, a big change has occurred in the past decade, with most wool now shipped in the same farm bale form as it leaves the shearing shed.

The answer reflects China’s dominance now as both a major import market for Australian wool and as a major exporter of low-density goods such as fridges, computers and furniture to Australia.

Australia is a net importer of goods from China, importing more containers of product from China than it exports to the country.

As a result, a surplus of 40 foot containers regularly return empty from the big shipping centres of Sydney and Melbourne to China to be refilled for re-export.

In order to recover some of the costs of returning those otherwise empty containers to China, shipping companies now typically offer very attractive back-freight rates to fill as many containers on the return leg as they can.

That means it is now less expensive for exporters to ship wool in farm bales from Australia to China than in dumped form, despite the fact that shipping wool in farm bales can require twice the number of containers that would be needed to ship the same volume of wool in tri-packs.

Shipping wool in farm bales does provide some cost savings for the exporter, removing the additional cost of re-handling and dumping wool prior to export.

It can also provide some benefits for the first-stage processor, because wool from less-compacted farm bales tends to open up more readily prior to scouring than tri-packed wool.

Wool from tightly compacted tri-packs is more “brick like” and can take longer to absorb the humidity needed to decompress to a level that allows it to be easily handled and processed, particularly in colder climates, such as in central to northern China. 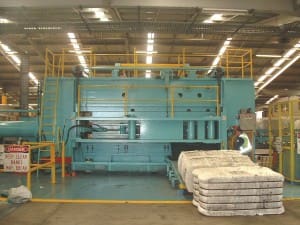 A dump press at one of AWH’s storage centres with tri-packed, steel-strapped export bales in forground. Picture: AWH Pty Ltd.

Managing Director Craig Finlay told Sheep Central this week that approximately 37pc of wool now shipped out of AWH’s Sydney and Melbourne warehouses is being dumped prior to export, compared to around 80pc a decade ago.

The opposite ratio applies in Western Australia, where the issue of surplus of 40-foot containers does not exist. About 65pc of wool leaving WA is exported in dumped form, with about 35pc leaving as normal farm bales.

Despite the lower costs of exporting undumped wool from Sydney and Melbourne, Mr Finlay said that not every customer is willing to receive wool in farm bale form.

Some lack the space in receival depots to store farm bales, particularly if they are still operating in urban, downtown locations, and prefer tri-packs for their stability and the ability to be packed very high, Mr Finlay said.

“However for the new plants, the very modern plants with a huge amount of storage, they don’t take any tri-packs at all now, it is all farm bales,” Mr Finlay said.

“So it doesn’t suit every exporter, but those that can are making use of it.”

Peter Morgan from the Australian Council of Wool Exporters agreed that there has been a distinct move to packing undumped bales into 40 foot containers for China.

While importers in the EU and India still prefer to receive wool in 20 foot containers, largely because of logistical issues and a lack of space in their storage areas, this did not appear to be a problem for many in the Chinese industry.

He estimates the costs of packing a container with farm bales are around $11-12 per bale, compared to costs of around $17-$18 per bale (east coast) for dumping and packing tri-packs.

Any saving good for industry: Broker

Northern wool broker Maurie McNeill from Australian Wool Network said any trend that helped to reduce costs in the wool pipeline was ultimately of benefit to the industry.

“This is a transportation issue that effects post-exchange of ownership pricing, and there are some modest savings there for the processor,” Mr McNeill said.

“Ultimately if there are costs for the processor saved down the supply chain, then that potentially frees up capital to pay for the raw material in times when the market gets dearer.”