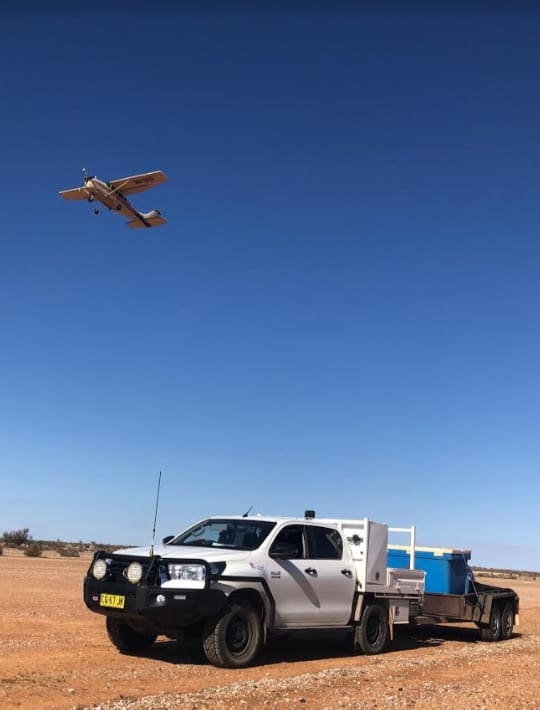 WESTERN New South Wales landholders have joined forces to bait against wild dogs by air and on the ground over more than 7.5 million hectares.

Western Local Land Services said more than 140,000 baits were distributed over a two-month period from March to May, with landholders placing baits over a combined area of over 7,500,000 hectares, and baits distributed aerially over 4,800 kilometres of bait lines.

Western Local Land Services general manager, Erlina Compton, commended the landholders who are members of the 17 pest management groups and Western Landcare NSW groups that participated in the program.

“The scale of the wild dog baiting programs in Western NSW and the coordination involved is a credit to the landholders and our biosecurity officers and support staff who make it happen,” Ms Compton said.

The co-ordinated program involved the aerial distribution of 48,214 baits along 4821 kilometres of baiting lines across 123 properties and 94,800 ground baits over 250 land holdings.

The landholders were also encouraged to utilise other effective control techniques such as trapping and ground shooting.

Western Local Land Service said while it is commonly known that wild dogs and other pest animals can cause significant losses to livestock enterprises with consequent economic and social impacts, there can also be considerable impacts to the environment and cultural heritage values of the region, through predation of small to medium sized native fauna species, including endangered species and those regarded as important totems for Aboriginal communities.

For further information about pest animal control in the Western Local Land Services region, contact the team via the new online enquiry form at www.lls.nsw.gov.au, by calling 1300 795 299 or via Facebook messenger.