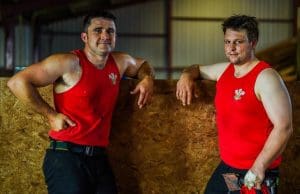 A WELSH shearing duo will attempt to set a British nine-hour lamb record in the north Wales town of Ruthin today.

The Welsh shearers, Gareth Daniel, 33, and Ian Jones 36, will work in tandem to shear as many lambs as possible in nine hours at Llysfasi Agricultural College in Ruthin, Denbighshire, from 5am British time or 2pm eastern standard time. Video of the event is not being streamed live.

It is the first time a tandem record for shearing lambs has been attempted in Britain, but the pair will be targeting the record of 1317 ewes set by fellow Welsh shearers Nicky Beynon and Rhys Jones in July 2003.

Gareth Daniel has been awarded Champion Shearer of Wales three times and represented Wales at four world shearing championships. He was the first Welsh shearer to win the prestigious Open Championship at the Corwen Shears and is also only the second UK winner of the competition. He is also a past winner of the All Ireland International Shearing Competition.

The contract shearer, and beef and sheep farmer from Penegoes, near Machynlleth in Wales, took up shearing aged 20, and was initially taught by family members, but made his first of many trips to work in New Zealand in 2004.

Fellow farmer and shearer Ian Jones from Hundred House near Builth Wells has been champion on the Welsh Lamb Shearing Circuit four times and won the French Open Shearing Championships in August last year. At 17, Ian was taught to shear by his uncle, before attending British Wool Marketing Board shearing courses and travelling to New Zealand to shear on many occasions. He also manages a flock of predominantly Beulah Speckled Face sheep and finishes store calves.

The shearing duo also recently competed in the open final at the Three Counties Show in Malvern in England, with Ian finishing third place and Gareth in fourth. The pair were also part of the Welsh team that came second in the Six Nations Shearing Competition held at the Royal Bath and West Show.

British Wool Marketing Board gets behind the record attempt

The British Wool Marketing Board that represents more than 40,000 UK wool producers is supporting the record attempt as the perfect platform to raise the profile of a vital industry skill.  The board said it is keen to encourage the next generation of shearers to learn and develop their skills.

BWMB chairman Ian Buchanan said record attempts such as Gareth and Ian’s are hugely important to the wool industry.

“Not only do they highlight the highly skilled individuals that are driving the industry forward, they also help promote the quality of British wool to a wider audience.”

BWMB Welsh Northern board member Bedwyr Jones wished the pair the best of luck and said record attempts provide an excellent opportunity for up-and-coming young shearers to watch and meet with highly skilled individuals who are passionate about the sheep they shear and the wool industry.

“The BWMB is actively trying to raise the profile of British wool and shearing offering courses throughout the UK to give shearers of any age and ability the opportunity to learn new skills and to brush up and improve on current skills”.