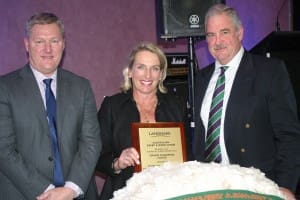 A WELL-TRAVELLED fleece from Tasmania has won the prestigious 2015 Landmark Australian Fleece Competition at Bendigo for the state for the first time.

In two trips across Bass Strait – firstly on the back of a ewe last year and more recently in a bag – a fleece from a shedded Trefusis Merino Stud ewe at Ross, Tasmania, has grown to be a national show winner, beating nearly 500 contenders for the top AFC award.

The superfine 17.8 micron fleece from the ewe firstly helped win a reserve champion sash for its owners Georgina and Hamish Wallace at the 2014 Australian Sheep and Wool Show in Bendigo.

The fleece was then entered in the Campbell Town Show in June this year and judged grand champion fleece.

Mrs Wallace told diners at the show’s Breeders’ Dinner last weekend she thought it was “pretty amazing” when her ewe was judged reserve champion fine wool ewe at the 2014 show.

But she was “absolutely gob-smacked” when the 2015 Australian Fleece Competition convenor Athol (Frederick) rang to tell her the ewe’s fleece was grand champion, winning her a $2000 travel voucher.

“It has been a great thrill and I did never in my wildest dreams think that I would ever win this award,” she said.

“I thought if I get a place in my class I would be absolutely thrilled.

“To win grand champion fleece for me has been a dream come true.”

It has been a big year of first’s for Mrs Wallace; it is the first time an Apple Isle fleece has won the competition and she was recently elected unopposed as the first Tasmanian and first female president of the Australian Association of Stud Merino Breeders.

Mrs Wallace’s winning fleece scored 94.55 points out of 100 to outscore an extra superfine 17.1 micron Merino fleece with 93.65 points from Phil Venning of Clare, South Australia. The 6.9 kilogram (skirted) Trefusis fleece was valued at $74.54, with a yield of 79.3 percent, a hauteur of 87.6mm, tensile strength of 54 Newtons/kilotex and 1 percent vegetable matter content.

Mrs Wallace said her ewe cut 9 kilogram when it was shorn in August last year.

“It’s the first time I think that anybody from Tasmania has won the grand champion fleece since the competition has been running.”

The ewe was sired by a ram bought from the Nerstane stud in 2009 and bred out of a Trefusis stud ewe.

The Trefusis stud was aiming to breed wool like the “fine type” fleece, she said.

Mr Venning’s fleece was valued at $69.44 and was also judged champion commercial fleece. He was the most successful exhibitor in the competition.