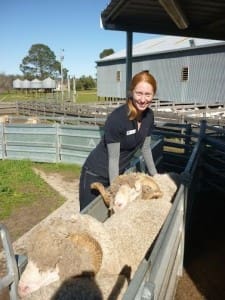 Western Australian Merino sires will be benchmarked against rams nationally for wool and meat traits with the rejuvenation of the Yardstick sire evaluation project.

After a three-year hiatus, the Department of Agriculture and Food is hosting the project at its Mount Barker Research Facility in conjunction with the Federation of Performance Sheep Breeders (WA) and consultants Icon Agriculture.

WA Merino studs have contributed 11 rams for the trial, with two from the eastern states to provide genetic links with other sire referencing groups across the country.

The two year trial, supported by industry and the Royalties for Regions-funded Sheep Industry Business Innovation project, with assistance from Australian Wool Innovation, is expected to yield data that will be accessible to producers in 2016. The trial is being organised by Bob Hall and Mark Allington from Icon Agriculture, in conjunction with a site advisory committee.

“This will include fat content, eye muscle depth, weaning, yearling and hogget growth rates, in response to increasing interest and demand for sheepmeat,” Ms Cornelius said.

“Objective wool measurements, like clean fleece weight, fibre diameter, length and strength, wool curvature and the co-efficient of variation will also be measured.

“Breech strike characteristics will also come under scrutiny, with the flock being measured for faecal worm egg counts, alongside visual assessments of breech wrinkle, colour, fleece rot, face covering and a structural inspection.”

The Merino ewes, provided from the department’s research facility flock, were recently inseminated and will drop their lambs in early July.

Ms Cornelius said the benchmarking trials would ultimately benefit not only the participating studs, but also commercial producers.

“The inclusion of link sires will enable us to see how WA rams compare against all other sires entered in Merino Sire Evaluations nationally, regardless of when or where they were mated,” she said.

“The results will enable breeders to see how their sires are performing and to identify areas in their breeding program they wish to refine.”

Producers are realising that genetics matter

“You know where you stand with all the other rams that have ever been tested and indeed, via Sheep Genetics, with other breeders and their animals who haven’t been in sire evaluation.”

“They’ve woken up to the fact that genetics matter and sire evaluation really improves your linkages with Sheep Genetics,” he said.

“I think it is the ultimate in entering figures to Sheep Genetics if you are in sire evaluation.

“It is completely independent and people can go and see their own sheep.”

The other Yardstick 2015 sires are:

Simon Bell, Centre Plus, ID to be advised