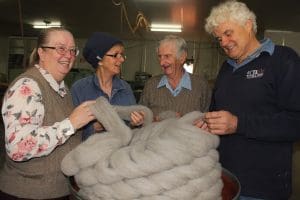 Mr Walker will shift production of the former ACS yarn brands Patons, Cleckheaton, Panda and Shepherd to Bendigo, making the Bendigo Woollen Mills the biggest manufacturer and distributor of hand-knitting yarn in Australia and New Zealand.

But what has excited Australia’s small speciality wool and natural fibre sector is Mr Walker’s intent to do commission worsted spinning in the 5.8 hectare factory at Wangaratta.

“There is a vast factory premises here with lots of machines in it that haven’t been used and I thought here is an opportunity, let’s get some of them going again and see if we can do some commission spinning,” Mr Walker said.

“A couple of tonne a week would be really nice, if we could get that amount coming through.”

“Until I had got my head around what we were going to do here in Wangaratta, I would have not been doing this work at all … they would have been trying to find other small places in Australia, or more often than not I would have referred people to Design Spun in New Zealand, who we have a good relationship with.”

Mr Walker said he bought Wangaratta Woollen Mills to maintain the ACS yarn brands that once were spun in Australia and would now be produced in Bendigo, with balling and dying at Wangaratta.

“The idea to do commission spinning at Wangaratta means that I can cover all of the overheads of this vast building – that’s the main intention.”

All the yarn brands – Bendigo’s Heirloom and Wangaratta’s Patons, Cleckheaton, Panda and Shepherd yarns – will form the Australian Yarn Company range, with all warehousing at Wangaratta.

The commission spinning plant will be located adjacent to the Wangaratta factory shop and there would be an opportunity and scope to have guided tours for tourists, he said.

Mr Walker said Wangaratta’s commission spinning equipment had the potential to spin fibres in a range of microns, from 19-29 micron, with superfine spinning maintained at Bendigo at this stage.

His preferred consignment size would be 80-100 kilograms-plus, with no upper limit.

“If we get some really big orders and can’t do them at Wangaratta, we will take them to Bendigo.” 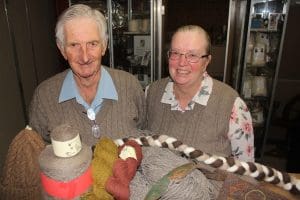 Coloured wool producers John French and Shirley Unthank with some of their products.

They are currently getting some of their wool processed at Charles and Trish Esson’s Cashmere Connections plant at Bacchus Marsh in Victoria, before it is spun into yarn at Wangaratta.

Mr Esson said there were a lot of mini-mills in Australia that could process single fleeces and small lots but with the collapse of Australian Country Spinners, the only serious worsted spinner left was Bendigo Woollen Mills.

He said a few companies were doing some woollen spinning, in Victoria, NSW and Tasmania, but that was disappearing also. Woollen spinning requires wool with a low vegetable matter content which usually means carbonising, using only low vm fibre or broken top.

He said the commission worsted spinning at the Wangaratta plant was good news.

“Colin has the skilled staff and the machinery to offer a spinning service to produce quality yarns.

“We will also be contract spinning Alpaca and Alpaca wool blends, so we will put our own jobs through there as well.”

This meant that Cashmere Connections, which had previously only made and sold cashmere and Alpaca tops, would be able to sell yarn as well as knitted and woven finished goods.

Mr Esson said the Wangaratta spinning initiative would allow Australia’s small-scale natural fibre market to expand and meant Cashmere Connections did not have to invest in a spinning capability at its Bacchus Marsh plant.

“We are pretty excited that Colin has decided to do this.”

“We should start planning our production systems around what is required – specialty fibres need small runs for niche products and at a fair price.

“Wool is now an expensive fibre compared to synthetics.”

The Australian wool processing industry could be rebuilt around a specialty philosophy, he said.

“The days are gone when you have tonnes and tonnes going through.

“It is not where we want to be; as soon as you are doing that you are competing with China.”

Mrs Esson said what Mr Walker is opening up is the ability for Australian companies to produce quality products for niche markets; including Merino growers value-adding their own wool and grower-designer consortiums.

“They want to do it in Australia, they don’t want to send it overseas.

“They want to have the ability to track that fibre from the fleece right through to the finished product,” she said.

“Colin opens that right up – it is the missing link he is supplying.”

Mrs Esson said the Wangaratta spinning option will also be available to other fibres and fibre blends.

John French said he didn’t think the wool industry establishment realised the potential of the hand spinning and knitting markets.

“Many young women are learning to hand knit – on a Wednesday afternoon at the local pub.”

John and Shirley said they sell all their products in Australia and some overseas. They find a ready market for woollen products even in the face of synthetic fibre garments at the same farmers’ market.

“We are strictly Australian; we have had no processing done overseas.”

She said most of their woollen products from the coloured sheep are left in natural colours, though overdying brought out unique and creative “three dimensional” colours.

Having the Wangaratta spinning capacity ensures the viability of their business, Shirley said.