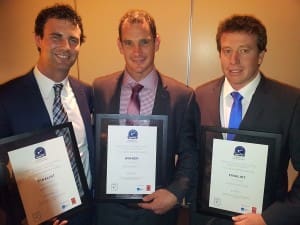 Rex Bennett knows it takes more than just wool to make sheep profitable and he works hard to give his clients all they need to keep their flocks viable.

A focus on client servicing in and outside the woolshed has won the Elders’ district wool manager at Wangaratta the 2014 national brokers’ award.

Simon said Rex wins a fully paid trip to the International Wool Textile Organisation’s   2015 Congress in Zhangjiagang, China, in May 2015, plus visits to major processing mills.

“This includes engaging in things like getting an appreciation for Australian Sheep Breeding Values,” he said.

“It’s a case of identifying where we can make some improvements and probably focussing on getting more lambs on the ground and therefore, more meat more wool per hectare — that’s where I’m aiming.

“Obviously what is driving us at the moment is that the sheep-wool-meat ratio has probably swung a bit, where there is probably more meat getting produced than there is wool at times,” he said.

“But’s it’s a case of making sure that those guys that are in it are making a profit, whether it be in wool or meat.

“And making sure that they are there, because if they are not there is not going to be any sheep or wool.”

Rex’s father ran a stud Merino flock at the family farm at Everton Upper, between Wangaratta and Beechworth, which Rex later bought. He left school and went shearing, before doing a farm apprenticeship at home and an advanced diploma in agriculture at the Longerenong College.

Rex entered the Elders traineeship program in 2004 and has been district wool manager for the company at Wangaratta for four years. He now runs a commercial self-replacing Merino flock on the farm.