Australian wool handlers Mel Morris and Rachael Hutchison get in the green and gold spirit in France.

SOUTH Australian blade shearer Johnny Dalla was the star performer for the nation at the 18th World Shearing and Woolhandling championships held at Le Dorat, in western France last week.

The SA shearer placed fifth in the championships blade shearing final, which was won by New Zealander Allan Oldfield who finished more than two minutes and about five penalty points ahead of South African Mayene Shweni. 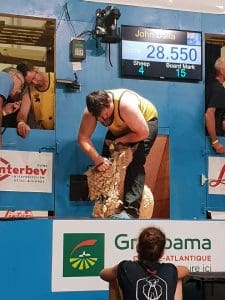 The efforts of the Canterbury blade shearers Oldfield and Dobbs in scoring the championship double was described as “a boil-over” Shearing Sports New Zealand media correspondent Doug Laing, as they beat previous regular champions South Africa in the teams final and then finishing first and fourth in the individual championship, with Oldfield beating defending champion Mayenseke Shweni.

Mr McCormick said all members of the Australian team performed well, with New South Wales wool handler Rachael Hutchison just missing out on a finals berth by one place by placing ninth in the semi-finals. Her fellow wool handler Mel Morris from Tasmania placed 13th overall in the championship placings.

Australia’s machine shearer Jason Wingfield from Cobram placed 15th and his wingman Daniel McIntyre placed 16th to just miss out on entry into the semi finals after three rounds.

“They performed very well in a competition with a very strong field,” Mr McCormick.

“They were all very happy with their efforts.”

Wales shearer Richard Jones won the prestigious machine shearing final and his country man Aled Jones was a clear winner in the wool handling, but the New Zealand shearing and wool handling team has dominated the last day of the 18th world championships by winning three of the six titles in contention.

In the teams wool handling final, New Zealand’s Sheree Alabaster, of Taihape, and Pagan Karauria, of Alexandra, maintained New Zealand’s stranglehold on the title, from the victory by Joel Henare and Maryanne Baty in Invercargill two years ago. Karauria was third in the individual final won by Aled Jones, of Wales, and Alabaster was fourth.

The teams win was Alabaster’s fourth world title, after individual and teams wins in Norway in 2008 and a teams win in Wales two years later, while Karauria in her first world championships had a big week, winning the French All-Nations warm-up event and making the All-Nations Senior shearing final..

Hawke’s Bay shearers Rowland Smith (the 2014 champion) and Cam Ferguson (the 2010 winner) were third in the teams event won by Scottish shearers Gavin Mutch and Calum Shaw, and were second and third in the individual event won by Richard Jones, of Wales.

But it was particularly close call in the individual event, after Smith and Ferguson were the first two to finish the 20-sheep contest, 10 seconds apart with Northland-raised Smith clocking 14min 32sec. Jones was over a sheep in arrears but pulled back crucial points in pen judging and beat Smith to the title by just 0.15pts.

The teams event was a big moment for Scotland which will host the next champion ships at the 20th anniversary Royal Highland Show in Edinburgh in 2022.

New Zealand team manager Ken Payne, of Balclutha, said those who work in the woolsheds in New Zealand are used to tough conditions, but the conditions of the competition in France tested them further.

“Although New Zealand had won four titles in Invercargill two years ago, there were no foregone conclusions about this trip,” he said.

“We always knew the different sheep breeds and types of wool would be a challenge, then there was the heatwave across Europe – about which we heard plenty while we were in Scotland for the Lochearnhead Shears beforehand.”

“There were long days, up at 6am and not home before 10pm, and I think everyone had difficulty sleeping, because of the heat,” he said. “It was 32deg at 1am on our first night”

He said all of the members were physically drained and exhausted early in the week, but it would have been no different for most of the other teams.

“In many ways this was the ultimate test, which is what a World Championships is supposed to be about,” he said. “Once the team switched onto competition mode and the adrenalin took over New Zealand became a formidable opponent across all events, and the performances seemed to get better as things went along.”

Oldfield’s win followed a rapid rise, having until three years and two months ago having never won an event. Taught by father Phil Oldfield, who was third in the 2017 championships, and by Dobbs in a shearing school in 2010, he has since 2016 won a unique grand slam of four major UK show titles.

While the trip was the first time he had represented New Zealand at shearing, he had been a national Under 20 representative in axe sports.

He plans to shear in the UK till the Royal Welsh Show, while Smith and Ferguson are scheduled for one test against England and four against Wales over the next three weeks.